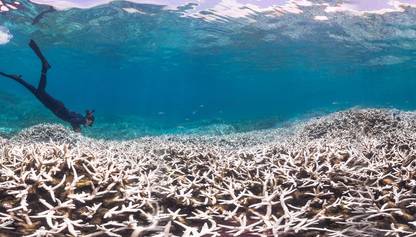 The International Society for Reef Studies (ISRS) is the international association to which coral reef scientists and managers belong. Corals are uniquely sensitive to climate change and the society has become increasingly alarmed at the extent to which elevated ocean temperatures are killing corals (through a process known as coral bleaching that is often associated with coral disease) and devastating highly biodiverse and economically valuable coral reef ecosystems. The society has recently published a consensus statement on coral bleaching and climate change which can be downloaded from the society's website at: www.coralreefs.org. The society's members are deeply concerned that robust evidence indicates that unless the increase in global temperatures is kept below the 2 degrees C which is proposed for agreement at the forthcoming United Nations Conference on Climate Change (COP21) to take place in Paris at the end of November (2015), the next few decades will see the loss of thriving coral reefs as we have known them from most ocean areas, The conclusions of this statement are:

The International Society for Reef Studies calls on all nations and negotiators at the Paris Climate Change Conference to commit to limiting atmospheric carbon dioxide (CO2) concentrations to no more than 450 ppm in the short-term, and reducing them to 350ppm in the long-term.

This should keep average global temperature increase to less than 2°C (or 3.6oF) in the short-term, and less than 1.5 deg C (or 2.7 deg F) in the long-term, relative to the pre-industrial period. This would prevent global collapse of coral reef ecosystems and allow coral reefs to survive in perpetuity.

If you support this call, please sign this petition.

Please include your professional affiliation (if appropriate) in the comments section and state if you are a member of ISRS.