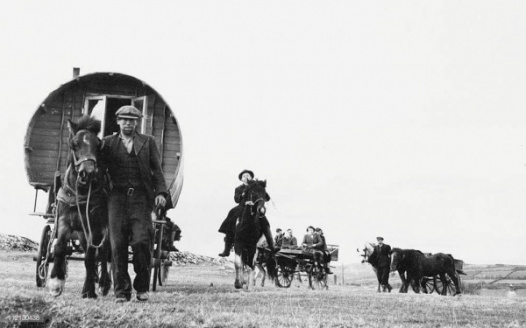 Travellers For Travellers 0 Comments
35 people have signed. Add your voice!
4%

We are calling on the Irish government to initiate article 46 of the Declaration indigenous people's rights. Our political campaign is for creating our own political structure that coincides with the existing political system. This is not a political separation, it's far more like political unity. As Travellers and non Travellers have a long Irish shared history on this island and in politics, our idea isn't that new. Our political concept is to create a structure which seeks to address the disenfranchisement of the majority of Irish Citizen Travellers from the functions of participation, selection and representation within local, national and European systems of governance. The core objectives of the initiative include:-

"The first of the UNDRIP’s 46 articles declares that “Indigenous peoples have the right to the full enjoyment, as a collective or as individuals, of all human rights and fundamental freedoms as recognized in the Charter of the United Nations, the Universal Declaration of Human Rights(4) and international human rights law.” The Declaration goes on to guarantee the rights of Indigenous peoples to enjoy and practice their cultures and customs, their religions, and their languages, and to develop and strengthen their economies and their social and political institutions. Indigenous peoples have the right to be free from discrimination, and the right to a nationality".

Engagement of Travellers In Political Discourse, Dialogue And Debate

Advancement of Voter Education and Exercise of Suffrage

Create a Forum for Examining A Broad Range Of Traveller And Non-Traveller Issues With Authority To Make Formal Recommendations To Local, National And European Government

To Improve the Capacity of Travellers for Nomination as Candidates for Local, General, Seanad and European Election

The idea is aspirational and is driven by a desire to find sustainable solutions to Traveller issues as well as to engage Travellers in a range of issues beyond their own ethnic group. It also aims to address the poor outcomes from existing Settled-Traveller interfaces and initiatives with a view to finding more effective mechanisms for designing and implementing solutions and breaking down barriers of hostility and discrimination. The initiative is under-pinned by core value that Travellers for Travellers is entirely driven and led by the Traveller Community.

Travellers for Travellers believe the social discord that exists between Traveller and non Traveller communities is a form of systematic oppression, most often hindered by political bias and in some instance, political bigotry. Creating a bridge to progression requires a forum of substance wherein big ideas and substantial structural issues can be examined and constructively presented to decision makers. In pursuit of this is proposed that a Traveller Citizens’ Assembly be established, modelled on the Irish Citizens’ Assembly, without participation from politicians, and constituted equally of men and women across all age cohorts and geographical locations. Assemblies would be chaired by a Barrister, Lawyer or Judge and the deliberations and recommendations of the Traveller Citizen’s Assembly would be submitted directly to governing bodies. Where legislative issues are deliberated, submissions would be made directly to Joint Oireachtas Committees.

It is also envisaged that a Traveller system of internal democracy can be developed where Travellers nominate and elect their own representatives on to Local Authority Policy Groups, State Boards; Oireachtas Committees and NGO’s. This process will enable Travellers to democratically elect their spokespersons and representatives on governing bodies charged with Traveller inclusion. Such a system will of itself provide a mechanism for aspirant Public Representatives to develop their skills and

The political aspirations of Travellers for Travellers, is for a fair and just society between communities and not against communities. Under the 2007 treaty signed by Ireland: The Declaration of indigenous people's rights and as Irish Travellers are recognised as indigenous ethnic minority community, we believe by creating a political construct of our own would go a long way in dealing with issues that affect not just our community but all communities in Ireland.