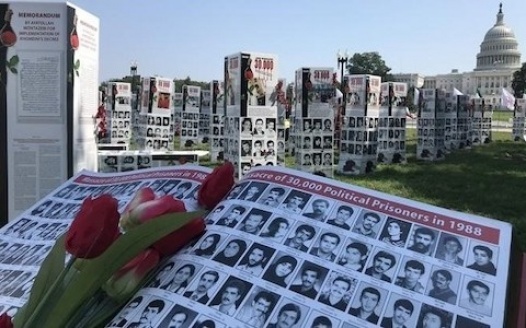 We are encouraged by your administration’s commitment to place human rights at the center of US foreign policy. The upcoming 76th session of the UN General Assembly is the opportunity for you to demonstrate such commitment on the world stage when it comes to Iran. As Iranian Americans who are former political prisoners, or have our loved ones killed or incarcerated in Iranian prisons for political charges under the tyrannical regime in Iran, we urge you to denounce Ebrahim Raisi, the regime’s new president, for his key role in the 1988 massacre of political prisoners in Iran which amounts to crimes against humanity. Raisi is responsible for the murder, imprisonment and torture of our loved ones.

In the summer of 1988, Raisi was a member of a death commission overseeing the killing of more than 30,000 political prisoners. The massacre was ordered by Khomeini to specifically target our loved ones who were members or supporters of the principal Iranian opposition movement, the Mujahedin-e-Khalq, also known as MEK. Our relatives and families in Iran have been seeking truth and justice over the past three decades to no avail. Over the years, the regime has resorted to inhumane and illegal acts to conceal or distract the truth about the 1988 massacre and its victims. These acts include destruction of mass graves where the bodies of our loved ones were dumped, dehumanization of the victims, and obscuring their political affiliation with the MEK. Raisi has been at the center of all these inhuman and immoral acts.

Amnesty International has said Raisi's election as Iran's new president is a blow for human rights and called for him to be investigated over his role in executions of thousands of political prisoners in 1988. Amnesty stated that the “majority of the victims were affiliated with the MEK, adding, “the circumstances surrounding the fate of the victims and the whereabouts of their bodies are, to this day, systematically concealed by the Iranian authorities, amounting to ongoing crimes against humanity.” Amnesty Secretary General Agnès Callamard said in a statement, "We continue to call for Ebrahim Raisi to be investigated for his involvement in past and ongoing crimes under international law, including by states that exercise universal jurisdiction."

Our call for accountability and justice is also backed by a strong bipartisan majority, 250 House Members of US Congress, in the House Resolution 118. The resolution, in no uncertain terms, urges your administration to support “establishment of an international investigation into the 1988 extrajudicial killings.” Your upcoming address at the UN General Assembly presents a vital opportunity to initiate this call for investigation and avert further massacres in Iran. We ask you to echo the Iranian people’s rejection of the regime, as evident in the unprecedented boycott of the recent elections, and the people’s call for a democratic, secular, and nonnuclear Republic of Iran. We the undersigned believe this is an important step for the U.S. to make human rights and democracy a central element of its policy on Iran.