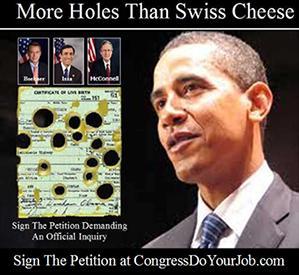 By signing this petition I am demanding an immediate Congressional Investigation into the electronic birth certificate released by President Barack Hussein Obama as well as his forged Selective Service Card and his very questionable social security number which can't even pass the e-verify test. By signing this petition I am also agreeing that members of congress that will not do the job we elected them to do, particularly in a matter of this importance, should be voted out of office.

This petition was written and posted by Mark Gillar, the host of TeaPartyPowerHour.com.