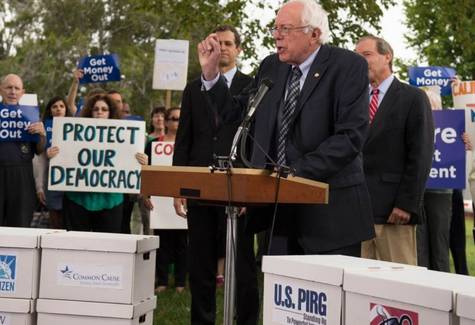 It's broken! Lets fix it!

Bernie Sanders has called for an investigation into the Democratic National Commitee, in part due to a bias in favor of Hillary Clinton's campaign exposed in the alleged democratic voter data breach. Is this true? Lets look at some facts.

Fact: The Chairwoman of the DNC is Debbie Wasserman Shultz. Her previous employment includes co-chairing the campaign for Hillary Clinton's 2008 run against Barack Obama.

Fact: The data breach was caused by Josh Uretsky. Uretsky was recommended to the Sanders campaign by both the DNC and NGP VAN, the company that manages the database.

Fact: Kroll Inc. was the company hired by the DNC to investigate the data breach by a Sanders campaign staffer. In 2012, Garth Williams, now the CFO of Kroll Inc., was working as VP and Assistant Controller, International for American Tower Corporation, who donated $61,600 to the DNC. They also donated to the Democratic Executive Committee of Florida, the state that Debbie Wasserman Shultz serves for in the House of Representatives.

After DNC's attack on the Bernie Sanders campaign, Bernie sanders himself has called for a top-to-bottom investigation. Debbie Wasserman Shultz has suddenly reversed course and is fighting against the investigation she set off.

If this smells funny to you, sign this petition. The corruption of our system by revolving doors and back room deals has spread from the rooms of congress and now threatens the very foundation of our democracy, fair and open election processes. This is our system, and it is broken. Let's show the people who think they have the power to twist OUR elections to their favor that WE are the ones with the real power. Do this by joining me in signing this petition for Bernie Sanders' request for full investigation!