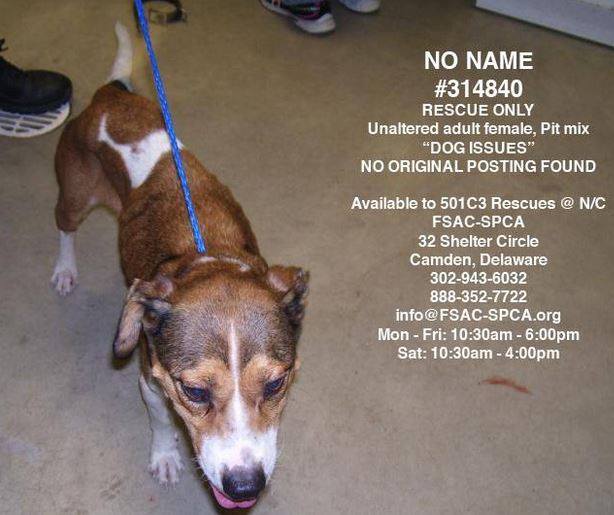 To: Delaware Department of Health and Social Services

We, the undersigned make this complaint, in accordance with § 3008F(h)(i) of Chapter 30F,Title 16, that First State Animal Center and SPCA (FSAC) prevents rescue groups from saving animals and fails to consider every reasonable alternative before euthanizing animals. This violates § 3004F(b) of Title 16, Chapter 30F, which specifies conditions that must be met by a shelter before any animal is euthanized. http://delcode.delaware.gov/title16/c030f/sc01/index.shtml

The Department of Health and Social Services is asked to conduct an investigation of FSAC's violation of the law.The Department should document findings within 30 days and post the findings online in accordance with § 3008F(e).

Further, it is requested that the Department issue orders to correct deficiencies and to impose penalties pursuant to § 107(a) of Title 16, in accordance with § 3008F(f) in those cases where FSAC has violated the law.

Title 16 clearly mandates that shelters allow rescue groups to save animals that would otherwise by euthanized, but FSAC is banning organizations for reasons irrelevant to animal welfare.

As a result, the number of animals transferred from FSAC to rescue groups and other shelters has dramatically decreased:

In the first half of 2012, there were a total of 451 animals transferred from FSAC (then known as Kent County SPCA) to rescue groups and other shelters. Over 50 organizations rescued animals from FSAC. (see http://www.nokilldelaware.org/delawares-rescue-honor-roll-in-1st-half-of-2012/)

In the first half of 2014, only 85 animals were transferred from FSAC to rescue groups. We don't know how many organizations rescued animals because there are no such statistics on the FSAC web page. (http://www.fsac-spca.org/info/#/shelter-statistics/ )

One factor in the decrease of animals rescued is the banning of certain rescue groups by FSAC. This violates the law.

Before a shelter may euthanize an animal, it must certify that certain conditions were met, including the following:

“(5) Organizations on the registry developed pursuant to § 3003F(d) of this title are not willing to accept the animal”.

The shelter registry must include organizations“willing to accept animals for the purposes of adoption.” The law does not allow a shelter to ban any group for any reason other than the fact that it wants animals for purposes other than adoption - such as laboratory research, for example, or dog fighting.

FSAC is violating the law by banning rescue groups and shelters for reasons other than that the group's purpose is to accept animals for the purpose of adoptions.

In some cases, rescue groups that accept animals for the purposes of adoption have been banned because FSAC doesn't like posts on social media by people associated with a rescue group or shelter. That is a violation of the law. Posts on social media are totally irrelevant to the question of whether an organization accepts animals for purposes of adoption.

Also, two Delaware shelters, Safe Haven and Faithful Friends, were banned from rescuing animals, starting in 2012, because neither organization would pay transfer fees charged retroactively for dogs rescued from FSAC in 2011. That reason is totally irrelevant to whether those shelters accepted animals for the purposes of adoption and whether their facilities were inspected and found to be inadequate. While Safe Haven no longer exists, Faithful Friends is an outstanding Delaware shelter, and FSAC should not ban Faithful Friends from rescuing animals.

This complaint requests that the Department:

- Investigate and report on which rescue organizations are now allowed to accept FSAC animals who would otherwise be euthanized;

- Contact rescue groups listed on the 2012 registry to determine which of those groups has been banned from accepting animals.

- Investigate which rescue groups have been banned by FSAC by asking for that information from FSAC and also from members of rescue community.

Note: § 3003F (c) has a provision that “Animal shelters shall have the right to inspect the facilities of any adoption organization taking animals from the shelter. “ This implies but does not specify that an adoption organization with inadequate facilities may be banned by a shelter from its registry. However, this does not apply to rescue groups. which are by definition groups that rely on foster care in individuals' private property, not facilities.

FSAC Failure to Consider Every Reasonable Alternative Other Than Euthanzing Animals

When FSAC sends out notices to their rescue registry, they have a "rescue only” policy. This mean that the animals may not be fostered or adopted by individuals. In the photo of the beagle in this complaint, it clearly states “rescue only.” That is the case in all other notices sent out by FSAC prior to euthanizing animals. That violates the § 3004F(b)(4) mandate that animals be fostered rather than euthanized.

The Department is requested to investigate the fact that FSAC does not allow animals to be fostered or adopted instead of being euthanized. The Department is also ask to issue orders to correct any deficiencies and to impose penalties pursuant to § 107(a) of Title 16, in accordance with § 3008F(f).

Delaware law is very clear that a veterinarian must determine whether an animal must be euthanized for “severe aggression,” except in emergencies or after business hours:

“c) Notwithstanding any other provisions of this chapter to the contrary, an animal may be euthanized immediately if necessary to alleviate undue suffering or to protect shelter staff and/or other sheltered animals from an animal's severe aggression or contagious deadly health condition. The determination of whether euthanasia is necessary pursuant to this subsection shall be made by a licensed veterinarian or, in cases of extreme emergency occurring after regular business hours in circumstances under which a licensed veterinarian is not available, by other appropriately trained staff.” [§ 3004F(c)]

FSAC states in their online statistics for the first half of 2014 that 171 dogs and cats were euthanized for “Aggressive Temperment per testing” (sic). FSAC routinely lists behavior issues for dogs on their “urgent” notices to rescue groups.

For example, the beagle pictured here is said to have “dog issues.”

The Department is asked to evaluate whether a veterinarian conducted the temperament test for this beagle and the other “urgent” animals to be euthanized.

If a veterinarian did not conduct all of the evaluations for those171 animals, the Department is asked to determine whether the evaluations were made in “extreme emergency occurring after regular business hours in circumstances under which a licensed veterinarian is not available.”

If FSAC cannot document an extreme emergency after hours for the animals euthanized on the evaluations of staff instead of veterinarians, the Department is requested to issue orders to correct any deficiencies and to impose penalties pursuant to § 107(a) of Title 16, in accordance with § 3008F(f).

Also, the Department is asked to investigate what training is given to staff in order to comply with the § 3004F(c) mandate that “appropriately trained staff” make evaluations in cases of extreme emergency.”

If FSAC cannot document such training of staff, the Department is requested to issue orders to correct any deficiencies and to impose penalties pursuant to § 107(a) of Title 16, in accordance with § 3008F(f).