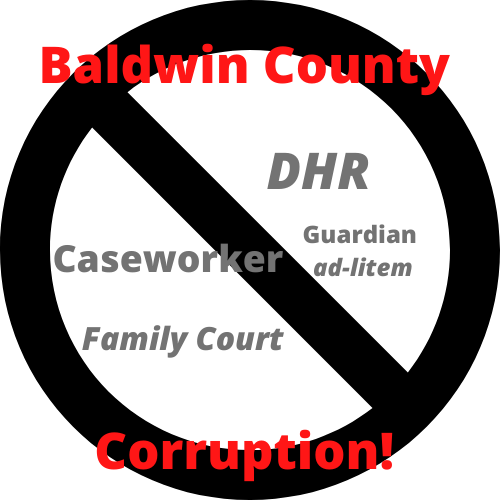 Wronged By DHR Mommy Of 2 0

Wronged By DHR Mommy Of 2 0 Comments
29 people have signed. Add your voice!
3%

Currently, in Alabama, especially in Baldwin County, A parent, doesn't have to have a prior open case, prior home study, and or prior investigation for their child to be taken. A parent can have proof, of his/her innocents of all "Concerns", because their doesn't even have to be a real allegation made, and their child can get taken. The Judge's here in Baldwin County, are like Puppet's on a string when it comes to DHR. Especially, Judge Carmen E. Bosh. This judge doesn't care that the parent, has proof, that her oldest child's name was Forged on the Safety Plan by the "Alleged caseworker." who removed, the mother's youngest child from her home. This Judge allows a Supervisor with DHR, to take the stand, although that Supervisor, had no direct involvement in the mother's case. That Judge, makes the stepfather of the children, who is also accused by DHR, in the case, step out to the court room, even though he's an accused party, he is not allowed to face his accusers. This Judge, yells at the Mother of the children, because the mother simply asks, if the stepfather, (her husband steps out, why should he still have to be involved in the case.) The Judge allows the Supervisor, to commit Perjury on the stand, and never asks the Supervisor, for any proof of the allegations made against the mother and stepfather. This Judge never once asked that supervisor, and or the Agency's attorney, why the worker that removed the mother's youngest child, and forged the name of her oldest child after the fact nor her direct supervisor was in court. The Judge accepted a report by the agency into evidence that was dated incorrectly, which was admitted by the Supervisor under oath. The date discrepancy was 16 days prior to the removal of the Moher's child, and/or any involvement with DHR. This Judge, didn't care to hear any evidence in the case, that the mother had to prove her innocents. She instead sided with the agency, placing the children n the State's custody temporarily. She then sent the mother the e-file report 2 days alter which had all kinds of untruths in it. One of which stated that DHR, had done everything they could to leave the children in the home of the mother, prior to removal. This is false, because, this mother has never had a prior open case with the Department of Human Recourses.

Sadly, there is much more wrongdoing by DHR, and Judge Bosh, in this mother's case, but it doesn't stop their. Many mother's, and Father's in Baldwin County, who are innocent, good parents go through the same thing. The sad part is no one seems to care. Th e Mother I mentioned above, is someone, you as lawmaker's should be proud of. She is a Notary Public, for the State of Alabama at Large. A business owner, and she's in Paralegal school. Never had so much as a speeding ticket. There's been no investigation in her case. Not before the safety plan she was forced into signing, by threats that her daughter would be placed in Foster care permanently. and Not since the Shelter care hearing.

When does it stop? When will this agency and Judges be held accountable? if the answer is never, then when can we hold you as lawmakers accountable on a Federal Level, for not caring that rights of thousands of Alabama Families, are being violated. Parents are losing their kids for nothing and it isn't right. When will enough be enough?

Sign this Petition today to ask our lawmaker's to Stand Up, and requre DHR, in Baldwin County, and Alabama DHR, to meet the burden of Proof. and to Hold bias judges who don' t go by the law accountable, for not hearing the paren'ts side, and takign the children of innocent parents.