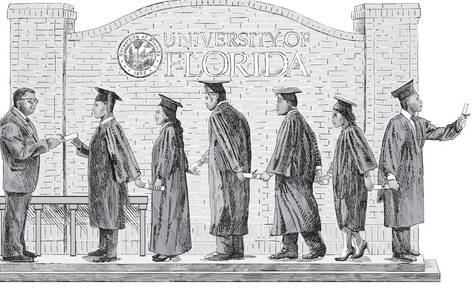 484 people have signed this petition. Add your name now!

Since 2013, Students at the University of Florida have requested a Monument honoring the 1958 court-ordered admission of African-American students to UF. The proposed monument shows Virgil Hawkins, (the plaintiff of the lawsuit to integrate UF), handing the diploma he didn't receive to UF's first African-American graduates. Each in turn passes their diploma to the next graduate, with the last graduate offering his diploma to the next generation of UF students. The UF desegregation monument is intended to publicly recognize the struggle of the initial trailblazers who transformed Florida's publicly-funded flagship university into a college that admitted the children of all Florida taxpayers regardless of race. The History of Hawkins's fight for the right of "Negro" students to attend segregated UF: After almost a decade of Florida’s refusal to comply with U.S. Supreme Court orders, UF ended its segregation policy only after Virgil Hawkins, the plaintiff in the NAACP lawsuit, agreed to withdraw his application for admission in return for an order admitting “qualified negro applicants”. The admission of African-American students to the University of Florida in 1958 occurred without violence or Federal Troops. For Virgil Darnell Hawkins, who fought for this right from 1949 - 1958, UF’s non-violent integration came at great personal cost. For almost a decade, UF, the Florida Supreme Court and the Governors and Legislatures of Florida defied the lawful orders of the U.S. Supreme Court that required his admission. Finally in 1958, after 4 orders from the U.S. Supreme Court and 5 illegal decisions of the Florida Supreme Court refusing to comply with the highest court in our nation, Mr. Hawkins, a poor powerless Florida citizen who risked his life during his decade-long fight, gave up his right to become the first "Negro" (as he was referred to during his court fight) to attend UF. As a result of his decision, the Federal Judge who delayed his retirement to insure that UF would remain segregated, signed the court order that required UF to admit Black Floridians to its graduate programs. The decision destroyed Mr. Hawkins life and his dream from age six, to defend members of his race as a Florida attorney, during the productive years of his life. Having acquired the right to claim a victory over the man Ebony magazine referred to in 1958 as "The South's Most Patient Man", UF complied with the order to admit negro graduate students. Without further court orders it then extended these admissions to its undergraduate programs and Florida’s other public universities also desegregated without the need for additional court orders. The lack of violence produced few news photos or television moments, so this history is not part of America's memory of civil rights history. The struggle of Mr. Hawkins and the UF's first black students, however, required many early students to bear the costs associated with being "the first", including incidents in the 1970's when the majority of black students were arrested and expelled by UF President Stephen O'Connell, who had been one of the Florida Supreme Court Justices joining in the court's ruling to deny Hawkins admission to UF despite direct Orders from the U.S. Supreme Court. This history remains bittersweet, but its non-violent legacy allowed Florida to avoid the scenes of Oxford, Mississippi, or of a Florida Governor acting like Alabama's Governor Wallace. The monument will recognize and honor this history. It is time for UF’s President and officials to agree to the reasonable pleas of its students. It’s time for UF to join Florida State University and the University of Mississippi's decisions to erect monuments to honor their historic milestones in America's quest for equal access to educational opportunities. With your help, we will dedicate this monument during the 60th anniversary of the 1958 admission of UF first African-American student, George Starke, whose efforts led to UF's first African-American graduate, W. George Allen in 1962.