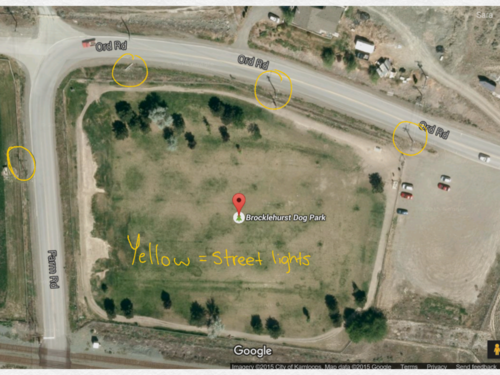 UPDATE: This is a message from Jen Casorso, social and community development supervisor, city of Kamloops."Thank you, Sara, and your effort to raise community support for lighting at the Ord Road Dog Park. Annually, the City has a budget for new dog parks and upgrades throughout the City. For 2016, the plan for Ord Road is to install lighting and within the next 5 years to install a new bathroom. We appreciate the support you have received for this project from the community so far, as it confirms the need for this. Right now we are looking at what options we have for providing an lighting solution sooner than later. We will keep you posted and great work!" I was also told that they will try to work on it soon. If not possible, then the city will try to come up with an alternative temporary way to light up the park for this winter. I would like to personally thank each and every one of you that helped sign the petition, shared it to raise awareness, and also mentioned it to other people. Your efforts won't go unnoticed!

Due to the lack of light in the dog park, it is left abandoned most nights. In the winter, it gets dark at 4-5p.m., and people don’t like to take their dogs to the park to play because we can easily slip and fall on the ice, step in dog waste, or hurt ourselves on the uneven ground. We believe that lights (street lights, moon lights, lighted pathways) will be very beneficial in keeping the dog park in efficient use throughout the winter and darker times.