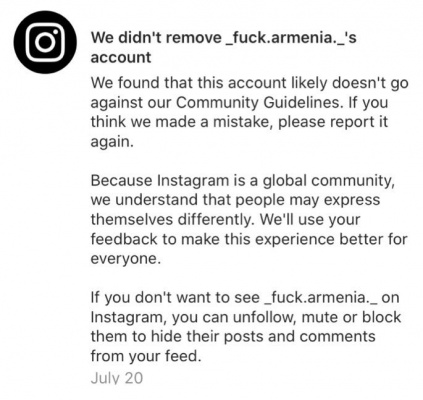 There are hundreds of Armenian hate accounts created by Azerbaijanis and Turks which constantly post the beheaded head of fallen Armenian solider Kyaram Sloyan, amongst glorifying Ramil Safarov who was an Azeri militant pardoned after he bludgeoned a sleeping Armenian to death with an axe.

These accounts are being generated constantly by the minute. They post and spread propaganda which has been proven to be false all while creating and posting hate crime against the Armenian people. These accounts have been reported NUMEROUSLY by hundreds of people, but Instagram is failing to take action and is pleading by stating there is nothing wrong with these accounts. This is depicting serious racism and discrimination all while making a joke out of the Armenian soldiers who were tortured by the Azerbaijani military. This ends here.