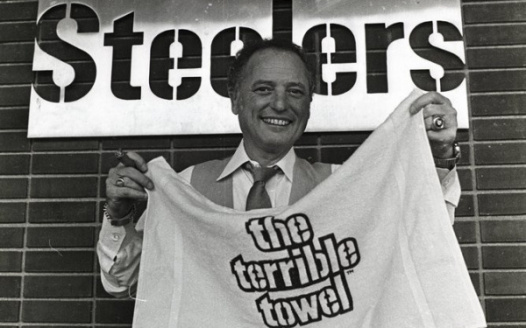 Induct Myron Cope into the Pittsburgh Steelers Hall of Honor

For 35 years, Myron Cope was the color commentator for the Pittsburgh Steelers on local WTAE-AM radio, and covered five of their historic six Super Bowl victories during his career. His distinctive voice, high energy, and catchphrases such as "Yoi!" earned Mr. Cope fans the world over, and he is still remembered today as the voice of the Pittsburgh Steelers and the inventor of the iconic Terrible Towel. We believe that his contributions to Steeler Nation and to the city of Pittsburgh, which include his award-winning work in sports journalism and his dedication to raising autism awareness, more than qualify Mr. Cope for induction.

Please sign our petition and tell the Steelers: Induct Myron Cope into the Hall of Honor. And please, spread the word and encourage your family and friends to sign the petition as well. Let's make sure the Voice of the Steelers is given his due place among the other greats in the Steelers Hall of Honor!