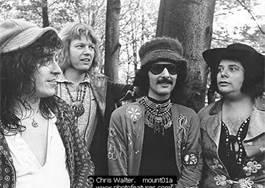 Induct Mountain in to The Rock and Roll Hall of Fame

In early 1969 Leslie West, formerly of the Long Island R&B band The Vagrants, put together a band, Leslie West Mountain (a reference to his then-large size), with Norman Landsberg (keyboards, bass) and Ken Janick (drums) and began playing concerts. Right around this time, former Cream collaborator Felix Pappalardi expressed an interest in producing West's work.[2] The resulting album, Leslie West Mountain, featured Landsberg and former Remains drummer N.D. Smart. The album spotlighted West's raw vocals and melodic, bluesy guitar style, and Pappalardi's bass lines were prominent throughout. According to West, when Pappalardi asked what would be next, West suggested the pair go on the road. The group was heavily inspired by seminal British blues-rock band Cream (with which Pappalardi had been a frequent collaborator: he produced Disraeli Gears, Goodbye and Wheels of Fire, also contributing viola, brass, bells and organ to the latter) and also comprised keyboardist Steve Knight, who was added after Landsberg left to form another group, Hammer, with Janick. Naming themselves after West's album, West, Pappalardi, Smart, and Knight played shows on the West Coast before getting to play their fourth concert as a working band at the 1969 Woodstock Festival in Bethel, New York.

Mountain was received enthusiastically by the festival audience but the band did not appear in the film of the event, nor was their performance included on volume 1 of the festival's live album. Their performances of "Blood of the Sun" (from West's album) and "Theme for an Imaginary Western" (a song they planned to record for Climbing and co-written by former Cream bassist Jack Bruce) did appear on the second volume of Woodstock performances.

Soon after Woodstock, Smart was replaced by Canadian Laurence "Corky" Laing,[2] who was the drummer on the classic Climbing!, which was released in March 1970.[1] It led off with what became the band's signature song, "Mississippi Queen", which reached #21 in the Billboard Hot 100, and was featured in the 1971 cult film Vanishing Point, while the album reached #17 in the Billboard Top 200.[2] Mountain began a hectic touring schedule in the middle of which they recorded a follow-up album, Nantucket Sleighride, released in January 1971. This album reached #16 but failed to yield a hit single. The title track was used in the UK as the theme to ITV's Sunday political program Weekend World.[2] After these early releases the band continued to receive a certain measure of critical acclaim but never again achieved great commercial success.

After Nantucket Sleighride, the band produced Flowers of Evil (November 1971) consisting of one side of studio material and one live side, culled from a concert at New York's Fillmore East. Within a year (West has since cited a combination of drug abuse within the band and Pappalardi's road weariness and burgeoning hearing impairment as primary factors), Mountain broke up. A live album, Mountain Live: The Road Goes Ever On, was issued in April 1972.[2]

Pappalardi returned to studio work, while West and Laing formed West, Bruce and Laing with former Cream bassist Jack Bruce.[2] Their first American performance was a Carnegie Hall concert, prompting a bidding war that Columbia Records won, and the new trio cut two studio albums and a live release over the next two years. After Bruce suddenly pulled out of the trio in 1973, West and Laing continued on briefly as Leslie West's Wild West Show.

By mid-1973, West and Pappalardi had reformed Mountain with Allan Schwartzberg on drums and Bob Mann (ex Dreams) on keyboards and guitar; the new lineup toured and produced a double live album, Twin Peaks (February 1974), from the tour. The studio work Avalanche (July 1974), for which Laing returned to play drums and David Perry became the new second guitarist (from November 1973 to October 1974), would be Mountain's final album with Pappalardi as a participant; the group broke up again after playing a final show at Felt Forum in NYC on December 31, 1974.[2]

On April 17, 1983, Gail Collins Pappalardi, Pappalardi's wife and songwriting partner (she had designed many of the band's album covers and wrote many of their lyrics), shot Pappalardi in the neck in their fifth-floor East Side Manhattan apartment.[2] He was pronounced dead at the scene and Collins was charged with second-degree murder. Later cleared of that charge, she was convicted of the lesser criminally negligent homicide and sentenced to 16months to four years in prison. After her release from jail, she vanished into private life.

After pursuing separate musical paths for almost a decade, West and Laing reunited Mountain, recruiting Miller Anderson (ex-Savoy Brown & Keef Hartley) on bass in 1981. Anderson was replaced in 1984 by Mark Clarke and the reunited group recorded Go For Your Life (March 1985) [2] (The album was dedicated to Pappalardi's memory). But Mountain went dormant again after this until 1992, when West and Laing teamed up once again and brought in Richie Scarlet (known for his work with Ace Frehley, Sebastian Bach and his multiple solo records) to round out the line-up. Scarlet was replaced with Randy Coven in 1993 and in 1994 there was a Mountain lineup that included West, Laing, Noel Redding (ex-Jimi Hendrix Experience) and special guest guitarist Elvin Bishop. By 1995, the 1984-85 Mountain line-up of West, Laing & Mark Clarke were back and recorded Man's World in 1996. In 1998 things went quiet in the Mountain camp again until 2001. That year, with Scarlet back in the lineup, the band recorded Mystic Fire.[1] which was released in 2002.

In 2003 West and Laing authored a book of recollections entitled Nantucket Sleighride and Other Mountain on-the-Road Stories detailing their time with the band at its peak and their subsequent careers.

Mountain's video game debut came in 2007 on RedOctane's Guitar Hero III, featuring "Mississippi Queen" as a playable track. The song is also featured in the Harmonix video game Rock Band, although the version featured is a cover of the studio recording.

Their most recent album is 2007's Masters Of War, featuring twelve Bob Dylan covers and a guest appearance from Ozzy Osbourne.

The band headed out on the road during October and November 2008 on a North American tour opening for Joe Satriani,[4] and with former Michael Schenker Group member Rev Jones on bass. A review of the San Diego House of Blues date covered the Mountain set, including "Blowing In The Wind" from the Masters of War album, with enthusiasm. Of the Satriani set, the reviewer was also pleased with the blues influence he felt Mountain brought to the evening, and with West joining in a Satriani-led, closing "Stormy Monday" and "Going Down" blues jam.[5]

Fellow Long Island native Howard Stern has called Mountain one of his favourite bands and has occasionally played their music on his show. Other Mountain fans include Johnny Ramone, Karma to Burn, comedian Dennis Miller, and John Frusciante (the Red Hot Chili Peppers track "Readymade" off 2006's Stadium Arcadium features a Mountain-influenced riff).

The beginning of the live recording of their song "Long Red" has become one of the most sampled drum breaks in hip hop, sampled in songs by EPMD, Pete Rock & CL Smooth, A Tribe Called Quest, Nas, Kanye West, Game, among many others.

Beastie Boys are also noted for their use of a brief sample of "Mississippi Queen" on the track "Lookin' Down The Barrel Of A Gun" off of their sample-heavy, 1989 album, Paul's Boutique.