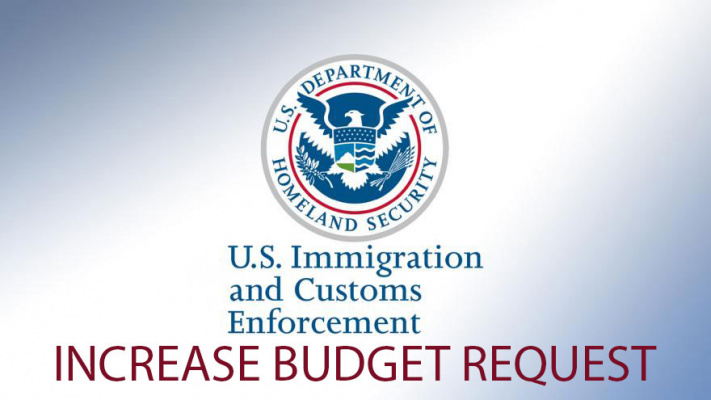 Increase The Budget For U.S. Customs And Immigration Enforcement (ICE)

And ENFORCEMENT OF PROTECTIONS FOR NATURAL BORN AND LAWFUL U.S. CITIZENS

This is a Petition, by WE THE PEOPLE, in support of the U.S. Customs And Immigration Enforcement, for the release of increased funding to protect our borders and our immigration laws! We the People, who support LEGAL immigration, are natural-born, legal and/or lawful United States citizens, who have demanded—the President of the United States, “declare an emergency” to get the southern border wall built.

WE THE PEOPLE, ESPECIALLY, THOSE OF us/U.S. along the southern border, also openly declare that this is INDEED AN EMERGENCY!

AS every single person that is crossing the border without a legal VISA is breaking the law.

About 190,000 people crossed the border illegally in 2018. Many of whom are dangerous criminals with gang affiliations and a violent past.

“We the People” also DECLARE THIS AN EMERGENCY, AS THERE IS EVIDENCE of these facts and that most of these facts were MADE KNOWN TO MANY IN OUR GOVERNMENT and the FBI—as far back as 2005, and that our own Government and/or Congress have continued to ignore us and do nothing to help us!

Here, we will also state that: We commend ICE, for fighting to protect our borders, our laws and protecting and securing the Citizens of the United States!

Furthermore, in regard to other concerns of our security and safety: We the People, demand that ALL people who have crossed the border illegally be fingerprinted, photographed, and DNA printed, to be entered into a database to further insure that ALL persons entering our country, can be further “background” checked with other criminal evidence resources and prevent future unlawful activity.

We the People, believe and demand that we should have a say in how our taxpayer monies are utilized, and we further state here that we do not agree or support any part of the new Spending Bill or any bill that will allow for further funding of or use of any U.S. taxpayer money for transportation, housing, and other support, etc., or for the busing in of illegal immigrants to “illegal immigrant friendly” institutions, centers and legal counsel, which is an abuse of U.S. taxpayers.

Aiding and abetting criminal activities, and harboring “illegal immigrants,” terrorists or criminal MS-13 or other gang members is a crime punishable by U.S. law! WE DEMAND ENFORCEMENT of our IMMIGRATION LAWS and the prosecution of Politicians who think that they are above our laws, if they aren’t prosecuted; then our laws mean nothing! However, these violations are punishable (x) times how many persons they aid and abet! With usually more than one crime for each illegal!

We request that the budget for the U.S. Customs And Immigration Enforcement Agency be increase to hire more agents and provide more dense coverage of our borders, and areas where illegal immigration and crime is growing rampant.

Also, CURRENTLY, there areContractors working on BORDER WALL PORTIONS along the New Mexico and Arizona border sections, which are actively being SHOT AT by illegal border crossers / human traffickers, etc.

Furthermore, in State and Federal Government officials so doing the above mentioned, by writ and otherwise; WE the PEOPLE, state and are witnesses, and do confirm by our signatures below, that our Constitutional Rights have been infringed, and if our representatives do not understand this word, we are informing ALL of our States Representatives, Congress, the Senate, & all of their Staff, that infringed means to; Actively break the terms of, or act so as to limit or undermine (something); encroach on.

Furthermore, we the people do bear witness and by our signatures confirm that our several State’s Representatives and/or Governors & their staff members, also our several Congressmembers, as well as our several Senators, by their writs have construed bills & laws, local & federal, as well as are confirmed in mail, news articles & videos (as testimony against them) thatthey have committed unlawful acts & TREASON, by adhering to, & aiding & abetting our ENEMIES, per 18 U.S. Code 2383 & per The Constitution of the United States, Article III, Section 3[1], which reads:

WE the PEOPLE, hereby inform States Representatives, Congress, the Senate & all of their Staff members, & hereby give the legal definitions of “Qualified Immunity”, &, “shall not be infringed”, and WE also inform what is, “Treason against the United States.”