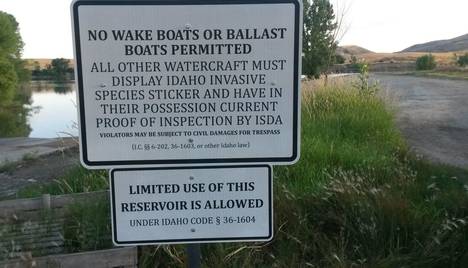 In 2016, the Twin Lakes and Consolidated Canal Companies of Franklin County Idaho have required the following:

"The verification staff will be asking for proof of a ISDA inspection form/passbook for any watercraft that has left the county AND a 2016 invasive sticker attached to vessel or Idaho boat registration. The ISDA form must then be displayed on the dashboard of tow vehicle. County residents need to visit the ISDA station within 5 days of launching or have an ISDA trailer/boat orange tag.

ISDA stations are open all daylight hours. One is located at Highway 91 in Franklin City. Others at state line roads throughout Idaho." The check stations at Glendale Reservoir and Twin Lakes Reservoir require the following:

"A verification checkpoint will be staffed 7 days a week from 7 am to 7 pm. The cost for verification per watercraft will be $10.00 for Franklin county residents and $20.00 for out of county. The license plate of the tow vehicle and driver license will prove residency. No cash accepted just debit/credit cards and local checks."

This requirement by the Canal Companies far exceed any State of Idaho requirement as it pertains to Watercraft inspections for Invasive Species specifically the Quagga Mussel, but it includes other such invasive water species. These requirements by the above Canal Companies hinder many individuals in the compliance of their regulations. It has also resulted in duplication of time and money for watercraft inspections.

As such, we, the users of Idaho's waterways, (fishermen, boaters, hunters, recreationist, and many other publics) specifically the Irrigation Canal Company reservoirs in Franklin County Idaho, recognize that the current funding level of the Idaho Watercraft inspection system is inadequate as are the number and location of the Watercraft inspection stations.

As such, we the Public of Idaho and all users of Idaho's waterways (includes out of State users) request that the Canal Companies of Franklin County Idaho and other Public and Private entities involved in this issue develop a much friendlier process to have their watercraft inspected easily and without undue hindrances and/or harassment placed upon us by the Canal Companies within Franklin County Idaho.

Ultimately these regulations preclude the majority of the Public from easily having their watercraft inspected to meet the requirements of the Canal Companies within Franklin County for 2016.

It has been publically stated (https://www.facebook.com/franklin.swcd.id?fref=ts), that this issues stems from the lack of funding and willingness to establish more centralized inspection stations around Idaho and specifically in Franklin County Idaho.

In previous years, these watercraft inspections were done onsite by employees working for and with the guidance of the Franklin County Soil and Water District. But, for some reason, the Canal Companies and other Agencies involved in this program decided that onsite inspections would NOT be done.

This resulted in a duplication in effort and a waste of time and money to just comply with the Canal Companies more restrictive watercraft inspection program.

Additional funding is in place. But, how that money is distributed needs to be looked at as to how it is used at all levels of Government in Idaho. The State of Idaho needs to become more users friendly and fully support the request in the number of inspection stations and employees needed to fully implement the required watercraft inspections as mandated by Idaho law.

As such, we, the sportsmen, recreationist, and users of Idaho waterways are requesting that the increase in funding by the Idaho State Legislature and other Idaho Government and Federal entities be looked at as to how this money is actually spent. Hopefully this money will be used to support more inspection stations, better awareness and public information to allow better uses of Idaho's water. This would also help protect the owners and activities of Idaho's waterways from the introduction of Quagga and Zebra Mussels into our waters.

This increased funding should also allow the current inspection stations at such high use reservoirs as Glendale and Twin Lakes, owned and operated by the Twin Lakes and Consolidated Irrigation Companies, to continue and to do onsite inspection at these two specific bodies of water.

In addition, we request that a more centrally located inspection stations to be put in place to help assist the many users of these water ways in Franklin County to comply with whatever regulations and or restrictions are put in place on these bodies of water.

If funding and cooperation at all levels of Government is not increased, this includes at the lowest level such as with the Canal Companies to the Idaho State Department of Agriculture, the use of Idaho's waterways by the public may come to an end. This could end up with introduction of the Quagga Mussel and Zebra Mussel into Idaho Waterways. This could be catastrophic. It could cause such an economic impact to the State of Idaho, that Idaho's agriculture and recreation programs could be so devastating that Idaho's economic future could be in question.

Last but not least, by and through this petition, we recognize that the State of Idaho Department of Fish and Game has, through its funding process by hunting and fishing licenses and other such funding matters, has been investing a lot of money from all sportsmen and women, into the infrastructure at some of these privately owned reservoirs. This also pertains to the stocking of fish and specifically fish management and regulations at these reservoirs. If there cannot be some compromise on making these watercraft requirements friendlier, then we ask that the expenditure of the Sportsmen and women's money be stopped at these private reservoirs in Franklin County Idaho by the Idaho Department of Fish and Game.