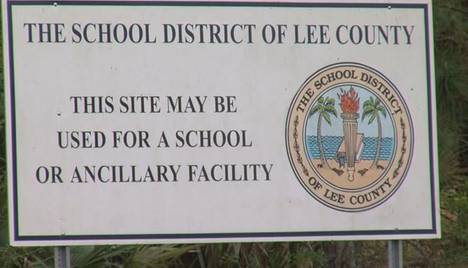 IN SUPPORT OF BUILDING A NEW HIGH SCHOOL IN GATEWAY

Members of four civilian advisory committees (Construction, Education & Diversity, Site Selection and District Advisory) have looked at every possible aspect of building the High School on the 2 sites. Members of these four committees have voted overwhelmingly in favor of the Gateway site, 62-19. But Alva, Inc., a small politically connected group with its own selfish agenda, continues to fight for this school.

The Lee County School Board is expected to make it's selection on June 6th. The new high school is then scheduled to open in August of 2020.

This is not an issue affecting only Gateway and Alva residents. The building of this school concerns every Lee County Tax Payer. And if Alva is selected, every tax payer in Lee County should be outraged at the boondoggle that will be an Alva High School. Here is why:

1. Per LCSD: Alva has 185 students within 2 miles of the proposed site. Gateway has 1,825. Which means tax payers will have to pay for 35 school busses at $100,000 each plus an average $35,000 per year to operate each bus. Students within 2 miles of the school will not be provided transportation. Gateway will require significantly less busing saving tax payers millions of dollars.

2. Utilities: When Gateway was being developed, the proposed site was expected to be a school. Therefore, all the utilities are available right up to the site. The closest water main to the Alva site is more than 10 miles, requiring digging up 10 miles of highway and millions more of your tax dollars.

3. Water Treatment: Gateway has a sewer system. Alva does not. LCSD said it would need to build an on-site water treatment plant to handle sewage. That water will then be released into the ground. The expected cost to tax payers is “estimated to be $10-$15 million” just to build the plant on site.

4. Fire Service: Gateway has water mains and fire hydrants up to the property. Alva does not. The Alva site would require “storage tanks be placed under ground” to provide water in the event of a fire. These tanks will require maintenance. More expense to the tax payer. And how much water is required to put out a fire of a 2,000 student High School? Will there be enough water in the tanks? What about massive brush fires?

5. Safety: Alva is a rural community with country lanes. There are no sidewalks, shoulders, bike paths or medians on most of these unlit, winding lanes and the county has no plan of upgrading these roads currently. One Alva resident said the road the school would be located is “not wide enough for 2 pickup trucks to pass without one yielding to another.” We have heard of too many fatalities on these type roads in Lee County recently. How long before an inexperienced student driver dies due to a head-on collision on a dark, foggy morning on one of these roads. Gateway has, wide, fully lit, county maintained roads, bike paths, sidewalks and wide shoulders for student and driver safety.

Safety of our children and grandchildren are paramount, of course. And there are numerous other reasons Gateway is a better choice for this school in besides the additional tens of millions of dollars to build in Alva and the massive additional maintenance and up-keep cost required each and every year. In fact, we cannot think of a single reason to build a school of this size in a community who largely doesn't want it, with a population that can’t support it, at a cost that will be millions of dollars over and above the cost of the Gateway site just to satisfy the selfish interests of a few. Please sign our petition to tell our elected school board officials to do the right thing.