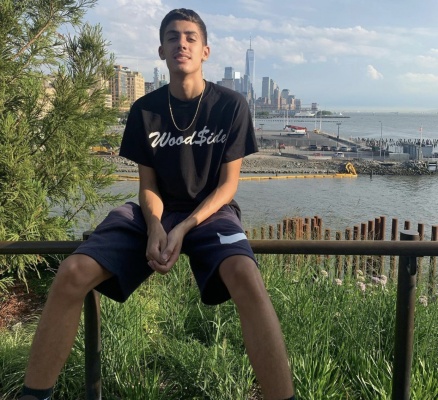 In Memory of Jaiden Juels Colon

When we think of Jaiden Juels Colon the feeling is mutual for all who knew and loved him. We want his name and legacy to live on forever. What better way to honor Jaiden than by naming a street after him in the neighborhood his family grew up in going back two generations? Jaiden was raised in Woodside, Queens and attended P.S. 11, the same as his mom, uncles, aunts and cousins. He was the oldest grandchild of his generation, and was looked up to by his younger cousins. Some of his favorite stops included Pizza Boy II and Doughboy Park. Jaiden was a true Woodsider and touched the lives of everyone he came in contact with.

Jaiden exhibited an angelic spirit. You could always count on Jaiden to do the right thing, at home, in school, and with his friends. Jaiden’s life was suddenly cut short on the afternoon of Sunday, July 25, 2021, just three weeks after his 17th birthday, and we would like his legacy to live on forever.

Jaiden was born on July 2, 2004. He had strawberry blonde hair, big brown eyes, and a smile that wouldn’t quit. As a baby, Jaiden was easy going, calm yet grabbed the attention of all who surrounded him. Jaiden grew up with that same demeanor, and as a result, was endeared by all. Jaiden’s legacy? You don’t have to be loud to be noticed. Jaiden was humble, kind and exhibited a sense of confidence by simply referring to himself as “Awesome”.

Jaiden was an exemplary student in school, earning the following awards and recognition: Excellence in Academic Achievement, Outstanding Achievement in English Language Arts, Science Award, Attendance Award, including Perfect Attendance and Student of the Month. He would have started his senior year in high school this year and would have undoubtedly received more of the same accolades at his high school graduation. He had dreams of going to college and becoming an architect or engineer. He was working on getting his driver’s license and had just opened a bank account to save the money he earned helping his dad at work. Jaiden was definitely planning for his future.

In his free time, Jaiden enjoyed spending time with his cousins and friends, both in person and virtually. Jaiden enjoyed listening to and producing music, and sharing his talent on his YouTube channel. He also enjoyed playing video games and sharing his gaming on his YouTube channel. Both his cousins and friends were guests on his channel, as Jaiden was the one who initiated and edited the episodes.

Jaiden was the only child to his mom and dad, Kristal and Andy. He was the light of their eyes. Jaiden was a respectful and helpful son who never, ever raised his voice or uttered a bad word in the presence of his parents, or any adult for that matter. For these reasons and more, Jaiden was a true role model to his peers. After his passing, Jaiden’s organs were donated, saving and enhancing the lives of many more. Jaiden definitely left his mark on this Earth!

We want to continue to look up to Jaiden with a street named after him where he grew up. Having a street in our community named after Jaiden would be a wonderful way to honor him for his humble heart, kindness and helping hand as we walk through our neighborhood, doing the things that he can no longer do. If we remember him in this way, Jaiden Juels Colon’s name will live on forever, including his legacy, which will serve as inspiration to the youth in our community. Our hope is to honor Jaiden’s life, and that would be “AWESOME” as Jaiden would say.