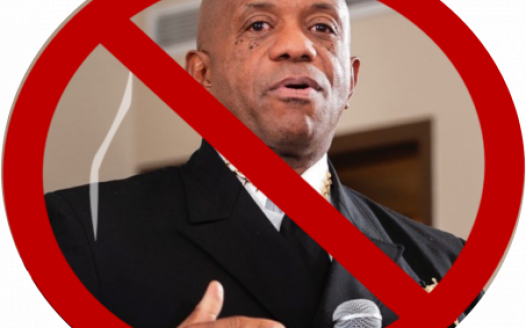 ...by REFUSING to WORK WITH U.S. IMMIGRATION and CUSTOMS ENFORCEMENT (I.C.E.) in partnership with the DEPARTMENT OF HOMELAND SECURITY under SECTION 287(g) of the U.S. IMMIGRATION AND NATIONALITY ACT (USINA) of 1952...

...and, as a result, has through his REFUSAL to turn over KNOWN ILLEGAL ALIENS in HIS CUSTODY to I.C.E. as outlined in section 287(g)of the U.S. Immigration and Nationality Act of 1952, ENDANGERED the CITIZENS OF THE CITY OF CHARLOTTE, MECKLENBURG COUNTY, and the STATE OF NORTH CAROLINA...

...and, having instead RELEASED KNOWN FELONS AND ILLEGAL ALIENS INTO THE COMMUNITY AT LARGE, THEREBY AIDING AND ABETTING those illegal aliens ESCAPE FROM JUSTICE UNDER U.S. IMMIGRATION LAW...

pursuant to NORTH CAROLINA GENERAL STATUTE, CHAPTER 128, ARTICLE 2, 128-16, (1) "For willful or habitual neglect or refusal to perform the duties of his office," to FILE A PETITION OF REMOVAL AGAINST SHERIFF MCFADDEN.

The people of Mecklenburg County deserve as a Sheriff someone COMMITTED to the FAIR and EVEN APPLICATION OF THE LAW, WITHOUT POLITICALLY MOTIVATED INTENT and in FULL COMPLIANCE WITH FEDERAL LAW.

Sheriff McFadden has proven by his ACTIONS, his INACTIONS and his PUBLIC DISCOURSE that his motivations are PURELY POLITICAL, and his REFUSAL to REMAND ILLEGAL ALIENS to the FEDERAL AUTHORITIES for ADJUDICATION and/or DEPORTATION puts him in DIRECT VIOLATION of those very laws he, as a sworn officer OF the law, has SWORN TO UPHOLD.

It is TIME for him to GO.