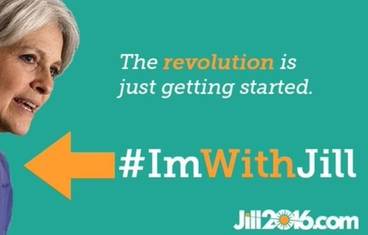 "I'll vote for Jill if you will” pledge campaign to elect Jill Stein president.

I’m taking the “I’ll vote for Jill if you will” pledge. In doing so, I join potentially millions of other voters who are fed up with “lesser evil” voting, and if this campaign reaches its goal, will vote for Dr. Jill Stein for president in November. I will now contact two other people who I respect and trust, let them know there is a real alternative to the Clinton vs. Trump political spectacle, explain that if we frustrated voters join together, we will not be throwing our votes away, we can elect a great president, America’s first female president no less. I will then direct them each to sign the pledge here, then do the same as I’ve done, each finding two others to take the pledge. This is people power! This is real democracy!