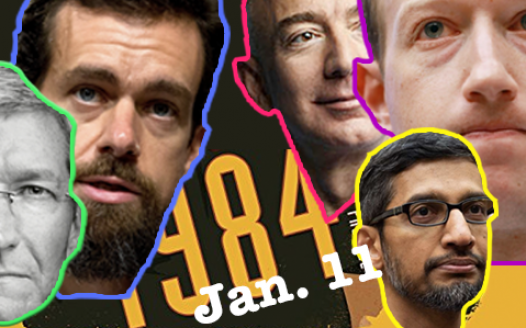 Please stop policing speech and thought and leave that to our own good sense and law enforcement. We, freedom loving Americans, have long tolerated your inconsistent, capricious and incompetent attempts to manage free speech to protect us. We already have a standard and methods for handling crime in this country, and most of the world, and don't need a parallel legal system.

Please re-instate Parler and let them find their own way of managing their public square. Let them decide what they will censor and how they will work with law enforcement. Their customers will vote with their feet if they are not doing a good job. At this point you have become the lawgiver, the police, the judge, the jury and the executioner - a most complex if not tyrannical role.

We, your employees, and customers do not support the positions you have taken and the power you have given yourselves. You are in fact a separate judicial system of your own: controlled by small teams of people accountable to nobody, devising, debating, interpreting and enforcing policies behind closed doors, affecting millions of lawful citizens for the alleged verbal aggressions of a few.

We ask you to limit enforcement only in cases where actual crime has been committed, or where those perpetrating the alleged crime have an outstanding injunction, warrant or conviction issued by a legitimate court and enforced by a well-established public agency. You have to err on the side of too much speech or potentially harmful speech - otherwise you are establishing yourselves as pre-crime units.

We ask for transparency, democratic controls, and innovation in the areas of management of free speech. We acknowledge that balancing speech and safety has not gotten easier in the age of the internet. We also shudder at the thought of enforcement teams from five companies controlling the speech of millions of people - with the click of a button, behind closed doors. What you have setup in your compliance and enforcement departments is more terrifying than all the security services of all the tyrant regimes of the 20th century.

We have given you our content, our attention, our money and even our deepest fears. You have masterfully played our need for connection, our weakness - trading freedom for convenience or safety - and our fears to become rich and powerful. Your stock prices have done well bowing to the loudest voices, choosing to cancel some voices (QAnon, Trump, etc.) and go easy on other sometimes violent movements (Antifa, BLM, etc.). At stake is freedom itself. Today, we woke up in 1984! I pray this is a bad dream, and not the new reality.

Culture and history are a struggle between the old and the new, the big and the small, the rich and the poor, the good and the bad, the informed and the ignorant. As Americans, however, we're steeped in, and hold most dear the power of individual choices and freedom of speech. We will not give them up to technocrats, bureaucrats, or those who would install their arbitrary puritanical morality or sense of fairness and equality over the rest of us. We will support the good choices and words of millions of insignificant people, even of the deluded among us, over the safe version of the world you are creating with your carefully managed free speech. We reject and oppose the social engineering and manipulation inherent in the new mass media technologies you have brought us.

Respectfully,
the signers of this petition.

[2] Cindy asks for a rethink of conspiracy theory