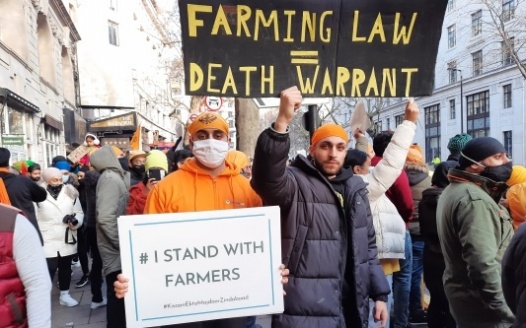 I Stand With Indian Farmers

We are collecting petitions in an attempt to get Vice President Kamala Harris to make act in support of the farmers protesting in India. Here is the letter!

It is with great urgency and concern that I write this letter to you. As you may know, the largest protest in human history is occurring right now in India. In September of 2020, the Indian government passed three farm bills that will allow for the mass privatization of Indian crops. This means that millions of small-scale farmers with lose their land and livelihoods, especially in the fertile region of Punjab. If this were to happen in the United States, there would be a rightful outcry. Therefore, we must support the kisaans (farmers) in India to get these laws repealed. I have gathered signatures from Indian Americans and allies to encourage you to act. As South Asian Americans, it is our responsibility to promote democracy and the right to peacefully protest without government violence. Over the past few months, the Indian government has violated the human rights of the protestors repeatedly. On January 26, the internet was shut off to silence and censor the truth of the protests. Our elders have been beaten, injured, and arrested by police officers and Modi’s followers. Some have even disappeared. The Indian media has been misinforming the public, labelling our elders as terrorists and enemies of the state, which is only creating a greater threat of violence.

Vice President, I and many others urge you to take a stand and share your support for the farmer’s protest in India and denounce Modi’s authoritative response. Not only is it our duty as South Asian Americans, but as people who believe in upholding human rights and democracy. I will end this letter with a message of hope—though my people are under the threat of oppression, they are resilient as always. They provide daily langar, or free meals, to all at the protest site—even the police. They have begun schooling children who are denied an education. They sing songs of solidarity and maintain their hope for change. Throughout all, the farmers have maintained their integrity and respect for humanity. Please do not let their suffering go unnoticed.