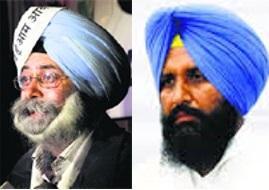 we are watching Punjab's election 2014.It can be seen that Ludhiana seat plays a great role in highlighting Nov 1984 Genocide.Candidate Advocate H.S Phoolka is contesting election from this seat. It has been seen that both SAD and Congress has not played proper role to provide justice against such non human killings till today.Therefore it is very important to see that is there any difference in thinking of Mr bains who is contesting independently against congress and SAD.

It is our humble request to him that he should not contest election from Ludhiana and support the noble cause for which advocate Phoolka is contesting election.Even if Mr bains win it wont make any change as independent MP wont be able to change anything but if he supports Advocate Phoolka it will help in providing justice to 1000's who lost someone from there family. This will not only prove that he is different from the traditional corrupt politics but also will prove his loyalty towards humanity.
Lets join our hands and influence 'Simranjit Singh Bains to support Advocate Phoolka for the cause.