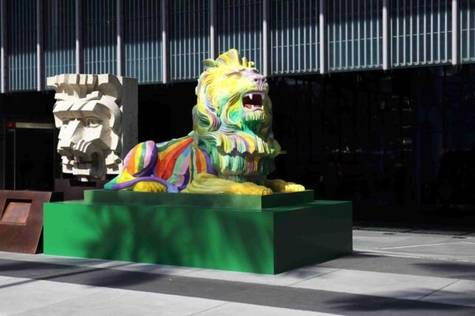 Joint Statement: Protesting against the “rainbow” lions of HSBC

In Dec 2016, HSBC has launched a programme called “celebrate pride, celebrate unity” which involves the laying of two new lion statues on pavement area of its main office building. The two lion statues look exactly the same as the current bronze lions named Stephen and Stitt except that they are in “rainbow” colors instead of the bronze color.
We opine that these two lions are disgusting because:

1. Disregarding the values behind them, the two colored lions are really ugly, disgusting and losing all the strength and stamina of the original lions. Frankly, it looks like HSBC is being chased by loan sharks and paint is being spilled upon the said lions.

2. The motive behind this “rainbow” color should come from the support from HSBC on the so called “Equality movement for the homosexuals” or “Homosexual movement” which is a controversial global social movement.

“Homosexual movement” is a social movement that proclaims the equality among homosexual and heterosexual relationships. In recent years, its scope is extended to include the concept of “transgenderism” which aims at the blurring/removal of the biological gender boundary by proclaiming that a person can proudly live according to one’s own psychological gender and wish. For example, a man can proudly dress as a woman and be free to enter a female washroom etc. This movement does not only target at “respecting sexual minority”, but also advances towards scapegoating anyone who has different opinions from those of the movement, For example, upholding that marriage should only be between one man and one woman or one should live according to one’s biological gender are considered discriminatory by the movement..

HSBC, as one of the major public listed companies and also one of the major banking groups in Hong Kong, is one of the top bankers locally. When considering such a controversial social movement, it is disappointing to find that the management of the HSBC group lends her support to this movement disregarding the feelings of the shareholders and the views of the customers. This very act may cause annoyance to the feelings of the customers and is constituting disrespect to the shareholders.

3. To many people in Hong Kong, the two lions at the HSBC main office building are already a historical landmark of Hong Kong and have become public memory of the Hong Kong community. Unfortunately, HSBC has created two ugly-looking “rainbow”-colored lions and placed them on the pavement area right outside its main office building so as to show the Group’s support for the homosexual movement. We think that this very act is causing annoyance to the feelings of many Hong Kong people as well as trampling on the existing family values of Hong Kong.

As we all know, it is not the first time that HSBC shows support to the homosexual movement. Previously, it has demonstrated her similar support by showing “rainbow” color lights in the main office building. In recent years and before adequately considering the local views and impact, HSBC has also begun to adopt some pro-LGBT policies such as providing family benefits to the homosexual partners of her employees treating them as legally-married spouses. This kind of policy is not fair to the shareholders because it essentially forces every shareholder to endorse the homosexual lifestyle. On the other hand, HSBC has also been supporting the LGBT events such as the Pink-dot, the annual Gay Pride Parade and other similar events.