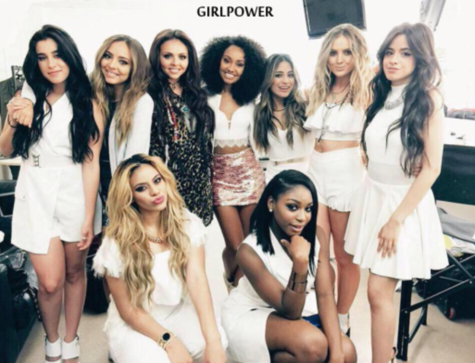 I firmly believe a campaign emphasizing on the return of "Girl Power" would greatly capture the public eye and inspire young women and men everywhere.

Women in the music industry (and every industry for that matter) have always been back-lashed for exuding confidence and/or holding a "boss" type persona. This kind of double standard has been around even before the age of pop music began expanding in the United States and around the world.

This post/petition's primary purpose is to let H&M know that a "Girl Power" campaign would be a brilliant idea and should definitely be taken into consideration for a future campaign! (hopefully 2016/2017). Since the Spice Girls and Destiny's Child, there really haven't been many girl groups around that have made a significant global impact in almost a decade. However, this has recently changed.

Two girl groups that have made airwaves include Fifth Harmony and Little Mix. Not only have these girl groups broken records, but are this decades prime example of "Girl Power". This means not only being confident in yourself and supporting each other, but showing girls (and guys) that everyone deserves equality and respect.

Having people interested in initiating this kind of concept/campaign will show H&M that "Girl Power" featuring Little Mix and Fifth Harmony as the faces of Girl Power, should be DONE! As the second largest global retailer in the world, H&M can easily spread this positive message to millions! In addition, with global successes Little Mix and Fifth Harmony, this campaign is sure to be beautiful, inspiring and filled with fashion forward attitude!

Help me spread this message to show the H&M team that this type of campaign would serve not only as a positive message in regards to equality and supporting each other, but show that "Girl Power" is back!

In addition, below are some of the girl groups' achievements!

Little Mix
- 12+ million records sold worldwide
- The group released their debut album "DNA" in the United States, where it debuted at number four, becoming the highest debut from a British girl group in the US, beating a record previously held by the Spice Girls, who debuted at number six with their debut album Spice in 1996.
- 11 consecutive top 20 U.K. singles + 3 U.K. numbers ones
- Glamour Women of the Year Awards: The Ultimate Girl Group (2015)

Fifth Harmony
- 3 Platinum hits off their debut album "Reflection" which currently has a peak of #5 on the Billboard 200 charts.
- Their debut album "Reflection" was featured in both Rolling Stone's and Complex magazine's mid-year 'Best - Albums of 2015 So Far' lists, ranking at number 14 and 21 respectively.
- Their debut album debuted at number one on the Billboard Digital Albums Chart, becoming the first ever girl group album to top the Digital Albums Chart.
- 2 MTV Europe Music Awards for Best U.S. Act and Best North America Act.
- MTV Video Music Award for Artist to Watch

It's back. It's here. It's more powerful than ever!

Also, if you happen to have other social media as well, help spread the word! Whether you have Instagram, Twitter, Tumblr, Facebook, etc! Join the conversation! x