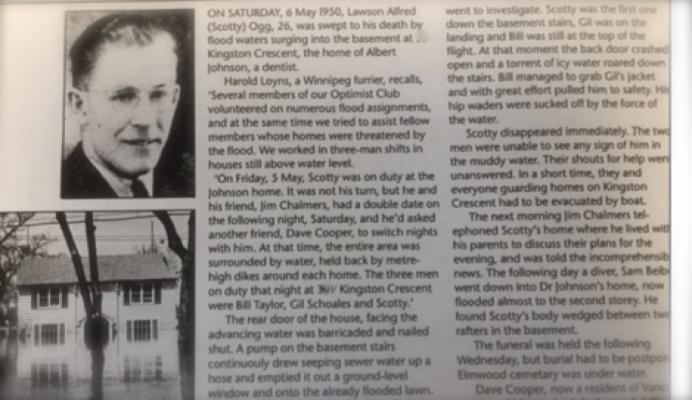 Your neighbours and friends who worked to bring more trees to our neighbourhood had so much fun, we have embarked on yet another project to make our area even better -- a small history project to express our gratitude to all volunteers that help protect our community during the flood season.

We propose to install some interpretive panels in English and French that explains who Lawson Ogg is, and the significance of the 1950 Flood in our area. And who is Lawson Ogg, you ask? Read more about it all below!

Sign our petition to help us make our next project a reality!

(The City of Winnipeg Parks department asked us to gather signatures from the 'hood to make sure people are in support of the project.)

We hope to obtain funding from a historical fund to cover the costs of the design, manufacture and installation of the interpretive panels in the park.

The unveiling of the street signs and interpretive panel (if permissions and funding is approved) is estimated to be May 6th, the anniversary of Lawson Ogg's death in 1950. And the whole neighbourhood will be invited -- hopefully by then -- to an outdoor socially distanced event where up to 100 people can gather safely! (Fingers crossed!)

Friends and Neighbours working on this History Project:

Contact us in the street, or send an email to: kingstontrees@gmail.com if you have any questions!