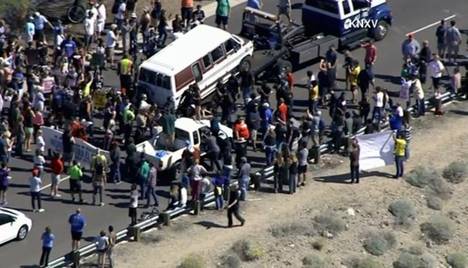 Highway Protesters should be fined, arrested and JAILED

Protesters have overstepped their right of protest when blocking our highways and freeways. This creates a dangerous situation for those stuck in these traffic jams.

Ambulances cannot get through or are forced to re-route. Those held hostage in their vehicles are sitting ducks to often violent protesters.

Also disrupted are those simply trying to go to work, pick up their children or go on with their daily lives. Our nation's commerce is impacted when commercial vehicles are blocked in and delayed. Our nation's truck drivers are suffering personal economic loss.

THIS IS COMPLETELY UNACCEPTABLE. We must empower the police to arrest, fine and jail those blocking county, city, state and federal roadways.

This is a call to those in positions of power to enact legislation ASAP to have these people forcibly removed and suffer severe consequences.