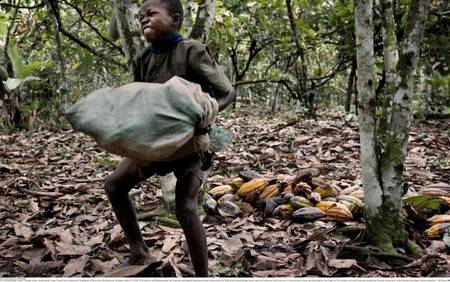 Hershey, which is the largest chocolate manufacturer in the world, gets most of its cocoa from West Africa. The company purchases the primary ingredient in its products from sources notorious for abusive labor practices including forced labor, human trafficking, and child slavery.

In 2009, the Payson Center for International Development at Tulane University published an "assessment of child labor in the cocoa supply chain.” The study found child labor to be widespread in the very regions of West Africa, particularly Ivory Coast, where Hershey sources its cocoa, and that forced or involuntary child labor was common in these areas.

Ivory Coast, located on the southern coast of West Africa, is by far the world’s largest supplier of cocoa beans, providing 43 percent of the world’s supply. According to an investigative report by the British Broadcasting Company (BBC), hundreds of thousands of children are being purchased from their parents for a pittance, or in some cases outright stolen, and then shipped to Ivory Coast, where they are enslaved on cocoa farms.

In 2010, on the occasion of founder Milton Hershey’s 153rd birthday, the Hershey company issued its first ever Corporate Social Responsibility Report. Long on platitudes and promises, it was classic example of the practice of greenwashing – a PR effort to mislead the public into thinking a company’s policies and products are socially responsible, when in fact they are not.

Faced with large-scale public pressure, Hershey has announced that they are moving towards Fair Trade certification by 2020. That’s a nice step. But why does it need to take them that long to end participation in a horrendously exploitive system? There’s nothing sweet about manufacturing 80 million Hershey Kisses a day, using cocoa that may very well have been produced using abusive child labor.

Please sign this petition to pressure the Hershey's Company in making this change sooner, rather than later.