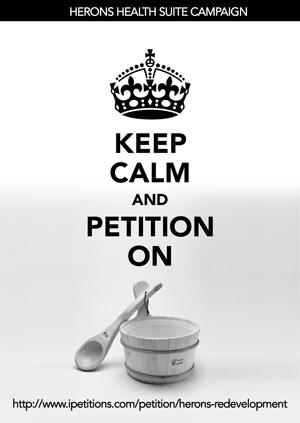 We the undersigned are strongly opposed to:

• The downscaling and gender segregation of the remaining sauna provision.

• The total lack of consideration for provision of any suitable cool down relaxation areas.

The Herons £2.8 million redevelopment scheduled for 2014 is being funded almost entirely by public money & yet fails successfully to reflect both members' & residents' opinions/interests demonstrated by Waverley's own commissioned public consultation conducted in January this year. The communal health suite was the most highly prioritised amenity of the Herons second only to the main centre offerings of the Gym and Swimming Pools in both the Member Survey, and very similar results in the separate Residents Survey (albeit behind the addition of a dance studio). We understand the redevelopment process is about compromising the needs of both members and the broader community but why is it one of the most highly prioritised needs - the health Suite been totally compromised above all others.

The remaining gender segregated downscaled sauna offerings that Waverley have included, have been widely reported from existing Waverley redevelopments as inadequate cramped 2 person saunas situated within noisy changing rooms with no provision to cool down or relax with friends, family, partners etc.

A lot of members have been left unhappy by the lack of information surrounding this process. This included the fact that redevelopment may actually mean loss of amenity, the common lack of knowledge that either the public consultation was under way or indeed the redevelopment was pending (many felt angered & felt a letter to each individual member was appropriate given the scale of the redevelopment and contractual obligations), real difficulty in obtaining information from either Kinetica or Waverley as to the results of the consultation, late delivery of poorly presented summary of results which failed to publish the order of prioritisation of both residents and members needs, initial presentation of illegible floor plans, individuals and couples being signed into contractual agreements with Kinetica unaware of the redevelopment works or the potential loss of the health suite and the segregation and downscaling of the sauna offerings. Problems/misunderstandings have also been encountered trying to bring positive commercial perspectives regarding health suite operations from other centres with very similar populations to Waverley's attention; this in effort to counterbalance Waverley's current culture of abandonment, downscaling and segregation in their Sports/Leisure portfolio.

The Health Suite is possibly the only amenity that Waverley provide that is solely geared to rest and relaxation, even in its current tired somewhat grubby state we celebrate its communal aspects that allow family, friends, partners and strangers to unwind in an informal setting irrespective of peoples age, gender, race or creed. Rest and Relaxation is one of the most important aspects of health & well being. Exercise alone although undoubtably important, without adequate rest & relaxation exercise only serves to further stress and strain the body.