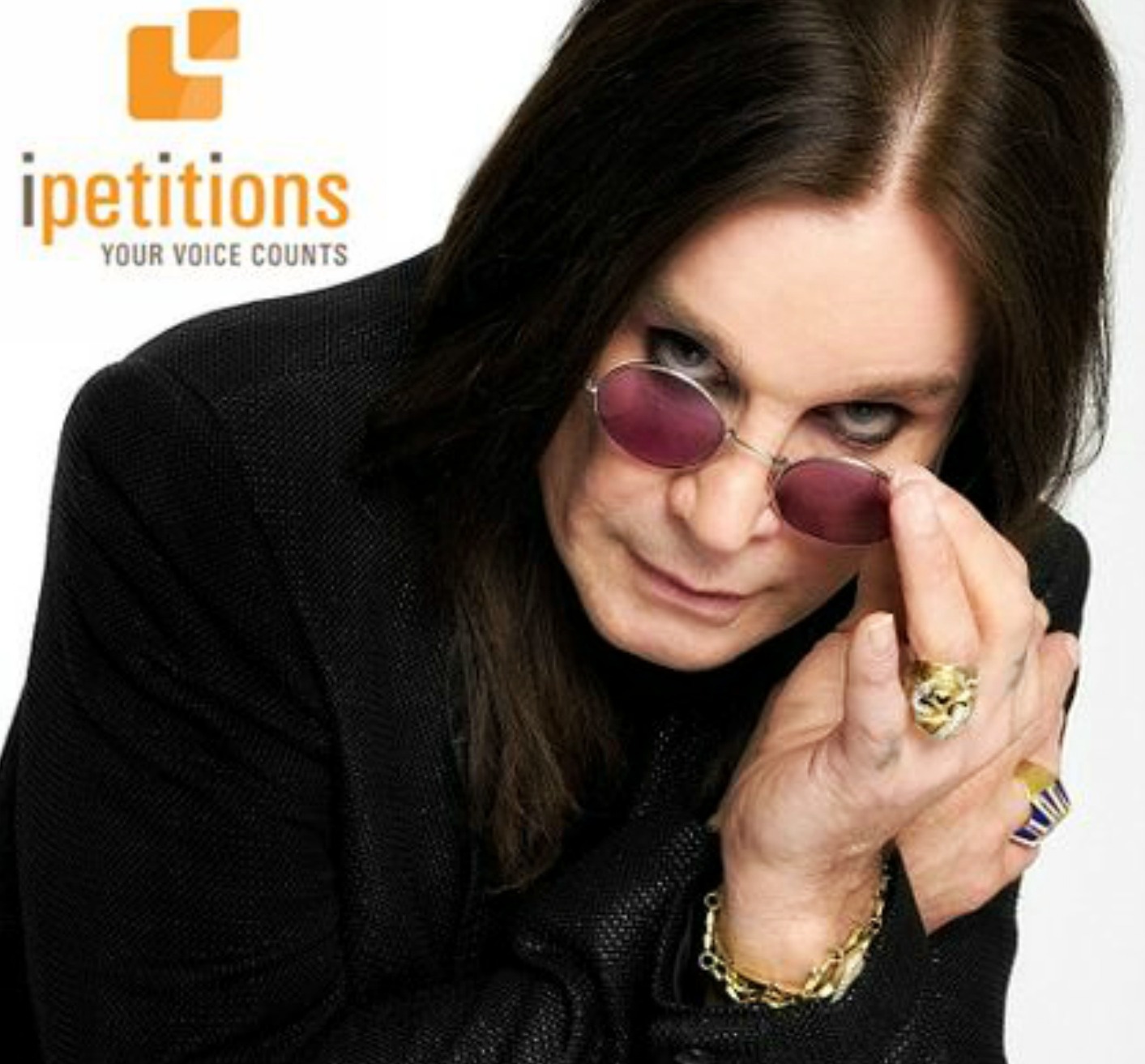 Did you miss out on signing the recent petition to knight Ozzy Osbourne? Well, it's back and this time it's through ipetitions.com for all those who missed out on the once in a lifetime opportunity to be a part of Rock history!!

Now is your chance to show how much you want this to happen for Ozzy by signing this new petition that I just created! BUT THIS IS ONLY FOR THOSE WHO MISSED OUT IN OUR ORIGINAL PETITION!

Join the legendary Zakk Wylde and others who have supported our campaign to get the greatest front man of our time, Ozzy Osbourne a knighthood!

REMEMBER THIS IS ONLY FOR THOSE WHO DIDN'T GET A CHANCE TO SIGN THE ORIGINAL PETITION!!!

Our previous petition had ended with only 21,071 signatures world wide!! Which really is just a drop in the ocean considering the huge fan base he has world wide!!

I have been getting a lot of feed back from Ozzy fans saying they had not heard about it at all and missed out!! Now is your chance to make yourself heard!!

We still have the opportunity to send more signatures and other documentations in support of our campaign to the Cabinet office even if they nowhave the nomination forms, letters etc.

It is not something that can be dealt with quickly, nominations take a while so why not utilise our time by giving others who missed out on signing the opportunity to be a part of this campaign as well?

This time our petition won't have a target date set, it will just be available to all those who missed out signing the first time for Ozzy who recently stated that it would be the 'Cherry on the cake' if it were to happen.

Please show your support for Mr John Michael 'Ozzy' Osbourne and help us get him a knighthood, for his services to music over the last four decades.
Mr Osbourne created Ozzfest, which launched the careers of the many successful bands we have today.

During his long career, he has always spoken highly of his hometown of Birmingham, and is very proud of his English heritage.

With the phenomenal success of his band Black Sabbath, their number 1 album "13", World tour and now with his latest solo project "Memoirs Of A Madman" which has also reached number 1 across many countries, he is indeed a force to be reckoned within the music industry.

Having received a star in Birmingham, as well as The Hollywood Walk of fame, and countless awards over the years, he is a credit to his country.

So, I ask you to please show your support and help us convince the UK Cabinet Office that Mr Osbourne deserves the greatest honour of a knighthood now!

Share this link to those who you know have not signed the petition and spread the word using the hashtag.... #KNIGHTOZZYOSBOURNE

Administrator of the campaign to get Ozzy Osbourne a knighthood.
Like Us On Facebook
The Knighthood Of Ozz
https://www.facebook.com/TheKnighthoodOfOzz