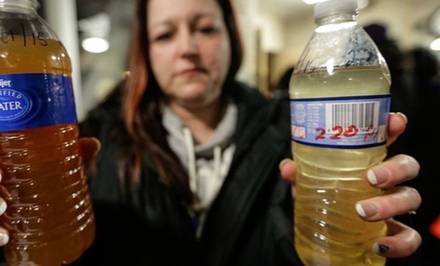 We, students of Michigan State University, believe the water crisis that has taken place in Flint has been unjust to all those involved. A simple change of water source in attempt to save money has resulted in an epidemic crisis, elevating blood lead levels of individuals, including children. Because of this, we need to stand up for our state and change the pipes in the city of Flint to prevent any further damage.

We have included some of the reasons that helping to fight for Flint is so important.

According to census information as stated by USA TODAY, 8,657 children have been exposed to lead poisoning from drinking the water since the first report of contamination.

It is estimated that about 64 million homes in the United States still contain lead paint and that 5 to 15 million of these have been identified as “very hazardous” by the U.S. Department of Housing and Urban Development

5% of the citizen's heart rates went up 200 bpm due to the contamination in the water.

The aging Flint water distribution system contains a high percentage of lead pipes and lead plumbing, with estimates of lead service lines ranging from 10% to 80%.

Lead is a potent neurotoxin, has an impact on many developmental and biological processes, most notably intelligence, behavior, and overall life achievement.

After reading this brief summary, it is clear that Flint citizens are in need of our help. It is our hope that you will help us in our efforts to raise awareness about the benefits of bringing new piping to Flint citizens. We are hopeful that this petition will bring Flint one step closer to getting the new pipes that they desperately need.