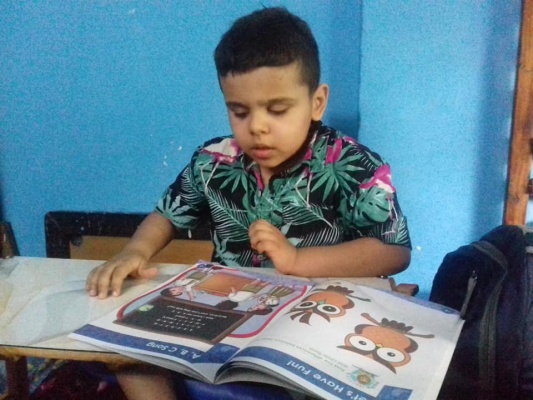 Bholanath is 5 years old, Autistic (Swabhalambhan UDID card), brilliant at mathematics, loves to learn. He doesn't have a mom. He needs school and therapy to defeat his disability. And he has made so much progress!! Early intervention means the difference between a normal life vs. a life of disability for Autistic kids.

Bhola was ordered admission to his current school for free and compulsory education by the Commissioner of Disability, Pune till 18 years of age as per RPWD Act 2016.

RPWD Chapter VI, section 2 defines “Every child with Benchmark disability has access to free education in an appropriate environment till he attains the age of 18 years” and section 1 Clarifies that this is “Not withstanding anything contained in the Rights of Children to free and Compulsory education Act 2009 (35 of 2009).” Further the “Appropriate environment” of section 2 is clarified in section 1 as a “School of his choice”.

The school admitted Bhola for Junior & Senior KG and agreed to the order from the department of Education, which clarified that for first standard (2021-22), Bhola would be admitted to the same school and his name entered in to the RTE 2009 system, WITHOUT HAVING TO GO THROUGH the RTE website and the ambiguity of the online portal’s lottery system.

Both the school and Department of education signed documents agreeing to the aforementioned arrangement. We also have the order from the Department of Education confirming the same.

We need Bhola’s name added to the RTE 2009 system for admission to his school, to the 1st standard without going through the lottery system. RTE system needs to facilitate and not HINDER a disabled child from getting his education. The law has an objective to help children, and procedural matters cannot be used as a reason to deny the law and the rights of the disabled children (or any citizen).

We recently (October 2020) confirmed the validity of our request with the Disability commissioner’s office, Ministry of SJSA Secretaries and with the erstwhile commissioner who had signed the order.

It would be traumatic and cruel to move Bhola from his school to a different school (through the RTE lottery), as he has already made friends, gets along with the teachers and obeys the instructions. It took a lot of effort from the teachers at the school, Sarva Shiksha Abhiyaan teacher, Bhola’s therapists and me to integrate Bhola in to the environment at the school.

At present Ministry of Education officers and secretaries have shown scant knowledge and regard for RPWD act 2016. It is disheartening to see how little they care that over 96% of disabled kids don't get an education in India.

Therefore we request that the existing framework be followed, and the law and agreements be honored. We are not asking for anything new, just honor the existing commitments and the law!

We just need you to confirm Bhola’s admission to the 1st standard and add Bhola’s name to the RTE system (without the portal and lottery system) and assign him his current school at Mumbai so that the school can get reimbursed for his education costs and Bhola can continue his education.

I ask you, did you read the times of India article https://timesofindia.indiatimes.com/city/chennai/chennai-dad-82-kills-44-year-old-mentally-ill-son/articleshow/71860744.cms

A father killed his own son, because he was afraid after he died, no one would be there to help his son!

Is this the future for me and Bhola? Or do you people want to enforce the law, the current framework, orders issued and help rehabilitate Bhola and help him in defeating his disability. We are not asking for anything more than helping Bhola get his constitutionally guaranteed rights which have already been ordered in writing by Government officers!