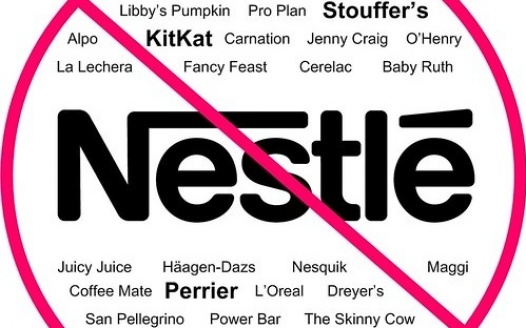 Help us take Nestle to court for their crimes

782 people have signed this petition. Add your name now!

Nestle is starting to become one of the most hated companies of all time. The number of crimes committed by this company alone far surpasses all other companies.

In the ’90s Nestle aggressively pushed their breastfeeding formula in less economically developed countries (LEDCs), specifically targeting the poor. They made it seem that their infant formula was almost as good as a mother’s milk, which is highly unethical for several reasons.

The first problem was the need for water sanitation. Most of the groups they were targeting – especially in Africa – didn’t have access to clean water (many don’t to this day), so it was necessary for them to boil the water. But due to low literacy rates, many mothers were not aware of this, so they mixed the formula with polluted water which put the children at great risks. Nestle seems to have knowingly ignored this and encouraged mothers to use the formula even when they knew the risks.

Nestle used unethical methods to promote their infant formula to poor mothers in developing countries. Nestle distributes free formula samples to hospitals and maternity wards; after leaving the hospital, the formula is no longer free, but because the supplementation has interfered with lactation, the family must continue to buy the formula.

Few people know it, but Nestle is actually the world’s largest producer of bottled water. In fact, they’re so keen on their water business (which also involves many of their other products), that they believe water isn’t a universal right. Chairman Peter Brabeck-Letmathe said:

“ There are two different opinions on the matter [or water]. The one opinion, which I think is extreme, is represented by the NGOs, who bang on about declaring water a public right. That means that as a human being you should have a right to water. That’s an extreme solution.”

Having access to water is not an extreme solution. It’s what we have called a basic need for centuries. Even Brabeck, after the media attack that followed, backed down. He said that he “believes that water is a human right” and “advocates for universal access to safe drinking water”. But his actions, as well as Nestle’s actions, show that that’s just greenwashing.

In the small Pakistani community of Bhati Dilwan, a former village councilor says children are being sickened by filthy water. Who’s to blame? He says it’s bottled water maker Nestle, which dug a deep well that is depriving locals of potable water.

Most people love chocolate, but few know the dirty deals behind chocolate production. The 2010 documentary The Dark Side of Chocolate brought attention to purchases of cocoa beans from Ivorian plantations that use child slave labour. The children are usually 12 to 15 years old, and some are trafficked from nearby countries – and Nestle is no stranger to this practice.

In 2005, the cocoa industry was, for the first time, under the spotlight. The International Labor Rights Fund filed a lawsuit against Nestle (among others) on behalf of three Malian children. The suit alleged the children were trafficked to Côte d’Ivoire, forced into slavery, and experienced frequent beatings on a cocoa plantation. In 2010, the US District Court for the Central District of California determined corporations cannot be held liable for violations of international law and dismissed the suit – a controversial decision which has since been appealed. But even if Nestle wasn’t legally liable for these abuses, they are, at least morally. But that wasn’t the only case of this kind.

The words above are all transcripted from this here: https://www.google.pt/amp/s/www.zmescience.com/sci...

All credits go to the original author

These are some of the many crimes that Nestle and its companies commit, and they need to be held accountable for this, sign this petition so they are taken to court.

Also try to boycott their products and from their other companies like Kit Kat or Nestea.