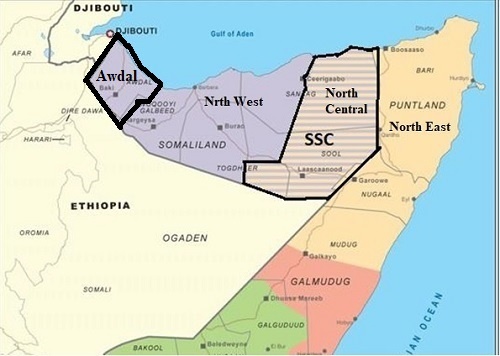 Help us save Somali unity and integrity in the interest of peace and stability in the Horn of Africa.

2123 people have signed this petition. Add your name now!

We are writing to express our deep concern about the recent conference in Djibouti between the Federal Government of Somalia (FGS) and the Somaliland Regional Administration (SL) and the glaring exclusion of the unionist people in northern Somalia. Mainly the regions of Sool, Sanaag and Cayn (SSC) and the Awdal region bordering Djibouti Republic. But also there is a large number of unionist people in Togdher and Northwest regions of Somalia.

Peace and stability in Somalia are vital for peace in the horn of Africa, the East Africa region, and other parts of the world. Somalia has suffered from a long period of brutal civil war, instability and abject poverty in which piracy and extremism thrived. Thousands of young Somalis risk their lives in the Sahara Desert and the Mediterranean Sea to reach Europe in search of a better life.

We want a full participation of northern Somali unionists in the reconciliation/reunification talks between the FGS and Somaliland. The recent conference in Djibouti was supposed to reunite the breakaway Somaliland regions with its parent country Somalia which collapsed in 1991 as a result of the horrific civil war, which has caused death, destruction, and perpetual despair in Somalia. However, the conference ended up promoting the cause of the separatists in the North and ignored the unionist population in Sool, Sanaag, Awdal, and Southern Togdher regions that oppose separatism and call for a united and democratic Somalia. The unionist communities were excluded from the deliberations, which allowed the separatists to forward their message to the international community giving the impression that all the Northern regions are seeking to separate from the Somali Republic.

We call on the Somali Federal Government and the sponsors of these talks, Djibouti, Ethiopia, the United States, the European Union, and IGAD, to rectify this error in judgment and allow the northern unionists to actively participate in the talks which we believe will lead to a positive outcome of the talks and will prevent of the illegal breaking up of the Somali Federal Republic. We warn that the exclusion of the northern unionists from the talks and the denial of their political rights will result in a renewed conflict and civil war in the North of Somalia and further divisions in the Somali nation.