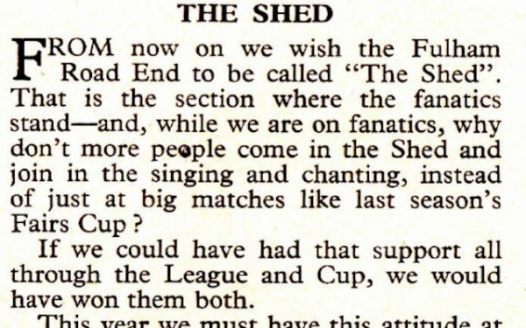 Help us get a statue of Clifford Webb at Stamford Bridge

How The Shed was named

The naming of a famous Chelsea landmark can be traced back to a fan’s letter published 50 years ago today. Season ticket holder Tim Rolls tells the story…

Chelsea’s matchday programme, twice winner of the Programme of the Year award in the mid-1960s, introduced a letters page in 1964, the first to do so. Over the next couple of years, along with complaints about ticket touts and suggestions for club songs, a number of letters were published on the need to improve the atmosphere at Stamford Bridge. These included a couple from legendary Chelsea supporter Mick Greenaway, now sadly deceased but fondly remembered as a cheer-leader by many supporters of that generation.

In the 1965/66 season Chelsea manager Tommy Docherty had upset many supporters by claiming there ‘are about 200 who follow us home and away… who are worth their weight in gold’ but that ‘the rest are a waste of time. Useless’. Atmosphere at Stamford Bridge was variable but at Fairs Cup games against Roma, Milan and Barcelona that season it was excellent. Among the 200 home and away supporters praised by The Doc were Greenaway and his friends.

Fan culture was changing. Singing and chanting were becoming more common and many clubs had a terraced ‘end’ where like-minded supporters could get behind their team. Blues supporter for over 50 years, David Collis, remembers that at the start of the 1966/67 season a few supporters discussed the need for Chelsea to have its own end to enhance the atmosphere. Clifford Webb, a passionate Chelsea supporter, came up with the name ‘The Shed’ (apparently derived from Leeds’ Scratching Shed south terrace) for the area at the back of the Fulham Road End, the only covered terrace area in the ground. He wrote a letter to the Chelsea programme advising that that end should thus be renamed, and that ‘fanatics’ should congregate under The Shed, looking to make it as fanatical an end as The Kop at Anfield.

Webb’s letter (a copy of which is shown below) was printed in the Leicester City programme on 7 September 1966, exactly 50 years ago. In those days around 80 per cent of match-going supporters bought a programme so most of the 29,760 crowd would have noted the name, and also the request for like-minded supporters to congregate there. The letter had a definite impact. Increasing numbers of supporters stood, sang and chanted in The Shed. The atmosphere at Stamford Bridge significantly improved, though its distance from the pitch, because of the dog track, meant some of the noise was inevitably lost.

The Shed became home for those who wished to chant, sing, sway and get behind their team for the next 28 years, until it was demolished in 1994. It is fondly remembered by a whole generation of Chelsea supporters. The name was retained in the rebuilt, all-seater stand and it is to be fervently hoped that it will be used if a Stamford Bridge redevelopment does go ahead. It was named by a supporter, unlike most ends which were named by their club after roads, locations, compass directions or club luminaries. The Shed is an integral part of Chelsea’s history and should be recognised as such.

Below is Clifford Webb’s letter as it appeared in the match programme in 1966, with comment from programme editor Albert Sewell at the bottom.