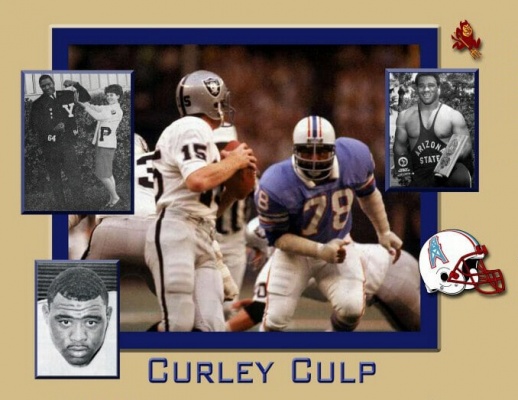 469 people have signed this petition. Add your name now!

Curley Culp attended Yuma High School from fall 1960 to May 1964. Curley had a positive impact on YHS during his time at YHS as well as for many years after his graduation. Curley excelled in football and wrestling during his years at YHS bringing positive attention to Criminal athletic programs. Upon graduation, Curley attended ASU and then followed into professional football, which culminated in his induction into the Pro Football Hall of Fame. Curley was also honored by the Yuma County Education Foundation for the positive image he brought to Yuma County. Curley has continued to influence YHS students, attending the yearly Hall of Fame induction events as well as speaking to the YHS student body on a variety of occasions and topics. The legacy of Curley Culp needs to be honored not only at YHS but also the City of Yuma. The Hall of Fame committee is currently working with the mayor to find a way to memorialize Curley at the community level and reinforce the positive model he has given locally.

We the undersigned enthusiastically support the Yuma High School Hall of Fame Committee's efforts to work with the City of Yuma to commemorate Curley Culp in the community and we wholeheartedly support the Hall of Fame Committee’s request to the Yuma Union High School District Governing Board to name the football stadium at Yuma High School the Curley Culp Stadium at Doan Field. We are asking for your support only at this time. Any donations solicited are in support of the web site hosting our petition.