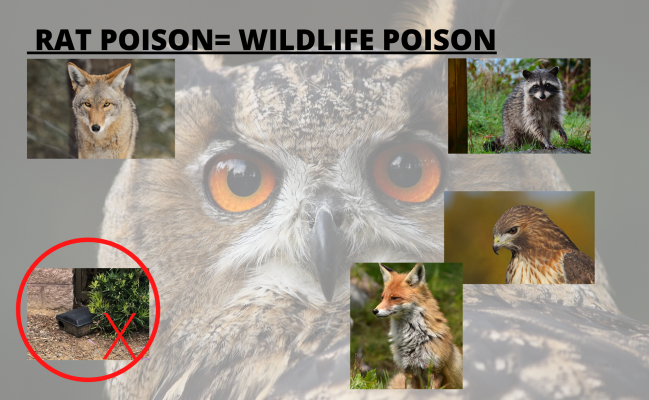 Help Stop The Use Of Rodenticide Poisoning!

Anticoagulant Rodenticide poison kills thousands of wild animals and pets every year. The poisons are traveling up the food chain, endangering more and more wildlife. Documentation in California shows that the problem of rodenticides moving up the food chain and affecting non-target wildlife is widespread.

Here lies the problem; Hawks, foxes, owls, raccoons and coyotes prey on rodents as a source of food. When they eat the poisoned rodent, it TOO will succumb to the poison and die!

Apartment Property Management companies & HOA's are two of the biggest culprits for using poison bait boxes. The Verge Apartment complex situated close to a rural area and river is a 444 unit building constructed in 2015. Since the construction of this building there have been sightings of sick coyotes in the vicinity. There are several POISON BAIT BOXES situated around the perimeter of the buildings. Exposure to rodenticides in coyotes can lead to an increased susceptibility to mange, which is evidently what these coyotes are suffering from.

There is NO SAFE PLACE for these poisons in our environment. Let wildlife do their part in keeping the rodent population down, as nature intended! Let's not POISON THEIR FOOD!