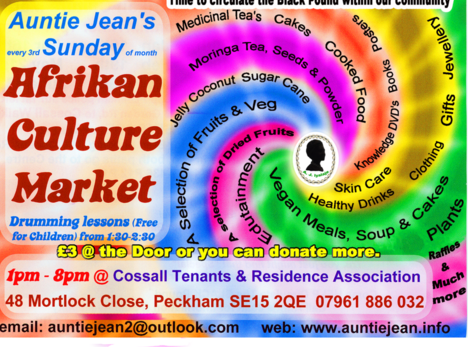 Help Save Our Afrikan Culture Market

Auntie Jean's Sunday Afrikan Culture Market is a Family Orientated Event that has a Showcase Platform that hosts not only Guest Speakers but also accommodates members of the community to promote their Business's, their Services as well as their Talents.

The Market Place has a variety different stalls selling a wide variety of items, the market also has a range of Cooked Foods from Traditional to Vegan meals. ACM is a great meeting place and very good for networking as well as getting current information & help in contacting professionals of different topics. The ACM is an Event that takes place once every third Sunday of the month.

The ACM has been running just over two years and is becoming very popular. Attracting people from all round the country. Unfortunately the Afrikan Culture Market is under Attack from the New Cossall TRA committee members who took over the running if the centre 1st August 2016. The Cossall TRA's then Chair since resigned, stated that some members of the committee do not like the ACM operating from the centre & to find somewhere else to go! My use of keys was taken, the centres main entrance door lock was changed, a new contract was drawn; demanding it signed. if signed it would be to the ACM's determent.

Sunday 15th January the Cossall TRA Committee members Sabotaged the event by Forcing Cancellation by denying the ACM's access to the premises; stating they will only open the hall if the contract is signed. This action is a Breach of the current contract the ACM holds.

If you have Benefited, Enjoyed, Welcomed the Community getting Together, The sharing of Information, A Family Orientated day out. Believe that this type of activity is needed in the Community Or would just like This type of Activity to Continue, Please let it be known by Signing this Petition. Give Thanks. Auntie Jean.

Helping UNITY in the CommUNITY