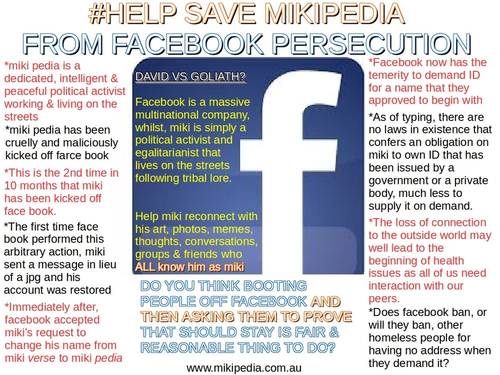 miki pedia is a dedicated, intelligent & peaceful political activist working & living on the streets of the boonwurrong, aka Melbourne, Australia, to advance the concept that we are all equal & free to make choices that aids the peaceful & tranquil navigation of our lives.

miki pedia has been cruelly and maliciously kicked off farce book FOR NO REASON WHATSOEVER!!!!

This is the second time in ten months that miki has faced this arbitrarily malicious & vexatious action from farcical book.

The first time, miki faced this persecution, he sent facebook in lieu of 'government approved ID' a polite meme as a jpeg making points and seeking clarification from a company that offers no presumption of innocence before taking punitive action, and no real conversational opportunities, preferring an ill mannered & dogmatic set of 'take it or leave it' instructions from an authoritarian pulpit.

The timing of this censure is interesting given that Facebook may be in fact be in the process of accruing private personal data of millions and millions of people as an agent of the United States government in readiness for the onset of the proposed Trans Pacific Partnership -TPP- whereby the aforementioned government can access personal details about people that in the normal course of events exist outside of their actual legal jurisdiction.

Alternatively, it may be because of miki's work supporting & living by tribal lore on occupied military land, standing up against political parties and their military agencies, or even miki's work on his multiple mikiverse webpages, his mikipedia.com.au webpage & a host of other political group pages on facebook dedicated to feeding homeless people and spreading awareness, advocating journalistic freedom of speech, offering people needing court assistance, a chance to connect with solutions, or generally, talking about economic, political, health, spiritual, legal, scientific, cultural, historical and philosophical issues, beliefs, and potential tomorrows with members of his abstract community.

In short miki is a solutions orientated man who in the normal scheme of things, would be lauded for putting himself out continually and consistently for the benefit of his community in alignment with his political beliefs

As of typing, there are no laws in existence that confers an obligation on miki to own ID that has been issued by a government or a private body, much less to supply it.

Nor is there any law that states that people that live on the streets should be denied membership of any internet web pages that offers memberships or accounts to the general public.

Many people have been a victim of farce book's bizarre coercive, anti privacy, and anti presumption of innocence activities which appear to be against the law.

The time has come to say no to farce book's oppressive heavy handed tactics in relation to people's ability to use farce book as an activist tool. Please sign and share this petition not only so that miki can reconnect with his art, photos, memes, thoughts, conversations, groups that he administrates, and 1250 or so friends, but, also, so that face book may realise that their behaviour is draconian and discriminatory and that they may elect to be more respectful of people and their private details.

This petition shall remain as long as it takes for miki to get his facebook returned to him in full!!! <3 :)