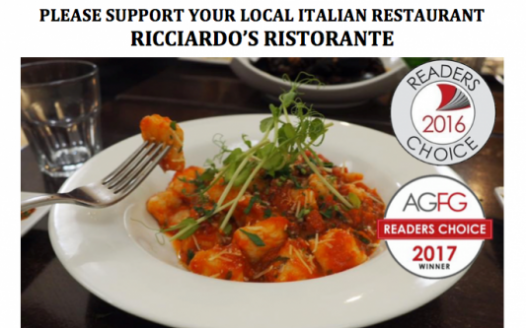 Ricciardo’s Ristorante has been a local Italian Restaurant situated in Duncraig for the past three years bringing its customers two times Australian Good Food Guide (AGFG) award winning cuisine. Ricciardo’s have made continuous efforts to upgrade the premises including a kids play area, a paved patio area and an outdoor wall. This work has all been undertaken by our Ricciardo’s family so that your whole family can enjoy our restaurant too.

Unfortunately, despite paying thousands upon thousands of dollars in rent over the past five years, we haven’t been met halfway by the landlord (Hawaiian Group). All we have requested is that they provide a better entrance to the restaurant as it is currently hazardous and totally inaccessible, especially for the elderly and those with wheelchairs. We also requested that the retaining wall be fixed as it currently is not Council compliant. Many locals are aware that we are the sixth owner of this premises, with the previous five collapsing from the landlord’s exorbitant rent demands without making a single improvement to a premises that was build in 1971. Although we have won awards and continue to bring a high standard of food to the suburb, the landlord point blank refuses to help us. This is heavily disheartening as the entrance to the premises is often dangerous, and could be fatal especially in wet weather with cars coming down the slope. Is Hawaiian waiting for a fatal accident to occur before they lift a finger to rectify an obvious problem?

These improvements that we have requested are in keeping with a WorkSafe report that we obtained and therefore are well within our rights to seek the changes be made. However, the landlord is seeking to push us out in the hope that someone else takes over and this cycle can be repeated without them ever having to pay out for any work to be done on the premises. We asked the landlord if the changes could be made before the start of winter as it is one of the toughest months to trade in. Furthermore, the wet weather causes a waterfall down the slope making restaurant access near impossible. Despite all the emails and telephone conversations, plus a public Facebook post on 9 February 2017 (which we are told to take down out of goodwill), nothing has been done. Instead Hawaiian has continued to charge us a total of $21,000.00 for the three months rent (a figure which excludes the outgoings of the running the restaurant such as staff wages, etc). With Hawaiian charging such a large cost in rent, we find it beyond unbelievable that a large multi-national corporation cannot organise an entry to a restaurant.

Furthermore, Hawaiian appointed a business advisor named Ian to come down and give recommendations. After making comments that perhaps something was wrong with the food, a comment that was undermined immediately by Ricciardo’s award history, he proceeded to tell Andrew, the business owner, that perhaps he should just give up and leave the lease. Such antics are indicative of Hawaiian’s intention to just keep renewing the lease at the expense of unwary small business owners. Lastly, many of our customers filled out over 100 feedback forms which we sent off to Hawaiian which they ignored, despite claiming they have their customers/patrons best interests at heart.

Please sign this petition and show your support of local small business and help us get the message across to the Hawaiian group!

The family at Ricciardo’s Ristorante