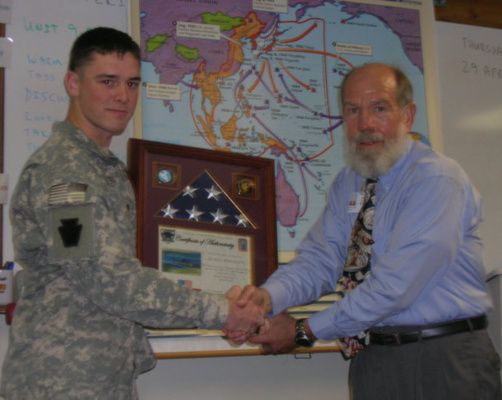 In our area, schools are often named after former school superintendents, school administrators, or possibly school board members. We suggest a change in the normal naming paradigm to honor a decorated Vietnam War combat veteran who continued to convey his love of country and real-world experiences into high school history classes for over a decade after retiring from the U.S. Army.

PLEASE SIGN OUR PETITION SUPPORTING COLONEL OLSON AND WE WILL SHARE YOUR INPUT with the Cabarrus County Board of Education. Our group is called, Friends for the Russell V. Olson, Jr. High School Naming Campaign. We are an informal group of Colonel Olson's friends, former colleagues and associates and students dedicated to sponsoring his name nomination.

The new high school is located just a few miles from the Olson Family Farm and in the same school district where Colonel Olson taught history for the last 10 years of his teaching career. Thousands of citizens of Cabarrus County have been positively impacted by Colonel Olson's love of country and dedication to positively influencing the students of the region.

Colonel Olson has touched many of our lives through:

The Colonel is often invited back to Cabarrus County School class rooms to share his experience with horticulture, his love of beekeeping and his steadfast support for our military, military families, veterans and youth interested in serving.

We can think of no better way to honor retired Colonel Russ Olson, a tremendous Patriot and Educator, than by naming this new school the Colonel Russell V. Olson, Jr. High School.