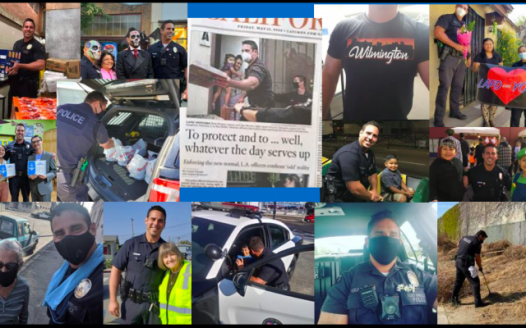 1242 people have signed this petition. Add your name now!

Many of you know Officer Nickolas Ferara as SLO Ferara from social media, community service events, or from his daily patrol work. If you are a Wilmington resident you have seen the huge impact he has had in our little community we call home not just. Currently Officer Ferara is an Acting Senior Lead Officer (SLO) for the North-Wilmington Area. What this means is that the position is not fully his. I created this petition for us to sign for two reasons: 1.) to present this to his current Sargent to make his position permanent and 2.) as proof of the relationship he has built with our community members along with the amazing work he has accomplished in his short term in the position.

Let’s put it this way, Officer Ferara has had our back every time we need him now it’s time to show him we have his back!

Below you will find a quick bio of Officer Ferara and his great work in Wilmington.

Officer Ferara has been a Los Angeles Police Officer for 15 years. Born and Raised in San Pedro and with many friends in Wilmington. Early on, Officer Ferara wanted to become a police officer and ultimately work in the Division where he grew up. In 2012, Nick was transferred to Harbor Division where he quickly started giving back to the community. In 2015, Officer Ferara was selected to work the Homeless Outreach and Proactive Engagement Unit (HOPE Unit). The HOPE unit was created to offer housing to homeless individuals. Officer Ferara worked for 2 years in this unit when Sargent Plows became interested in his many community events he has done over the last few years. Sargent Plows offered Officer Ferara a position in her Community Relations Office where he was quickly selected to be the Senior Lead Officer for the north Wilmington area. Officer Ferara quickly began housing homeless people, cleaning up trash and graffiti around the community, and protecting victims of crime. Officer Ferara then decided to buy $300 worth of groceries to deliver to those in need. This act quickly turned into a large-scale charity event with close to $20,000 donated from the community. This event fed over 1,000 families and all but $500 were used from this donation. The most unique aspect of Officer Ferara police style is outreach/engagement with those in need and the updates on social media. Good or Bad, Officer Ferara feels that all Wilmington community members have a right to see what their senior lead officer is doing on a daily basis. Because of these efforts, Officer Ferara was awarded the KNX Hero of the week award, was interviewed on live television multiple times for his charity work, was given a recognition award from the Wilmington Neighborhood Council, and received a recognition award through Assemblyman Gibson. Along with constant charity work, Officer Ferara has also focused much of his time on law enforcement. Officer Ferara has arrested multiple drug dealers, burglars, thieves and sex predators.