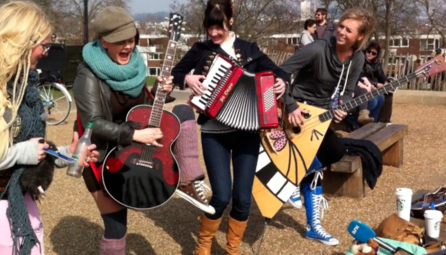 Help get Katzenjammer to play in Ireland!

Hey ho, everybody!   We need YOUR help to get Katzenjammer to return to Dublin!!!

Please sign this petition to show your support, and please share it to help spread the word about this campaign!

Katzenjammer have an upcoming UK Tour in November, so currently there is a short gap in their schedule for them to also hop across to Dublin and make their Irish fans happy too! Not to mention their infamous travelling fans who jet around Europe just to see them!

We hope for as many people as possible to sign this petition to get Katzenjammer to grace the Irish shores again! We believe there are many Irish fans out there, and many more international fans who would travel to Dublin to see them play there again. The last time they played in Ireland was at the Academy 2 in 2011- which is just too long ago in our opinion!

Then we will send the completed petition to Stageway (Katzenjammer’s management company) and to various Irish promoters. The girls themselves wish to play in Dublin again, and their management just needs a little push in the right direction, as they believe it is not economical for the band to play in Ireland. Let’s prove them wrong!!! If they see there is a demand from their fans for this to happen, we hope to make it happen!

Please sign this petition and share it to help spread the word!  We thank you deeply in advance from the bottom of our hearts!

Their songs incorporate a beguiling mix of musical genres and their live gigs are thrillingly joyous. On stage, Katzenjammer play a live version of musical chairs, where the instruments change hands for every song, so – effectively – it is a band without a front person, as every member *IS* the front person at various points throughout the gig. Check them out on their YouTube Channel and prepare to be mesmerised!!! :)