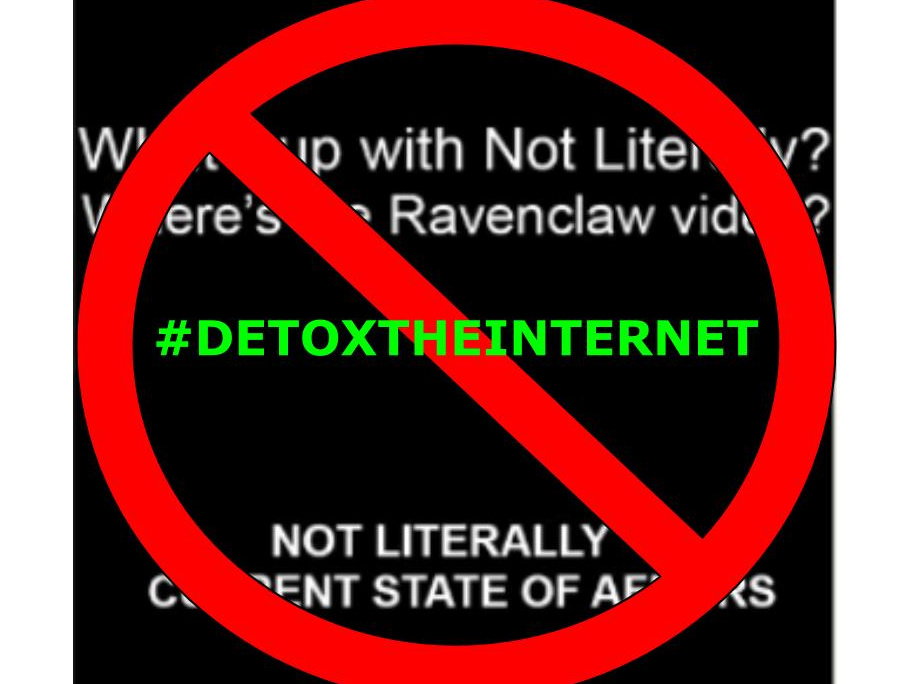 On August 5th, 2013, Not Literally, a YouTube production company made up of three talented, creative, and passionate individuals (Ginny DiGuiseppi, Dana Ritterbusch, and Erik Tande), posted a video and set up an IndieGogo campaign to fund the fourth and final of their immensely successful Hogwarts House Pride music video series: the Ravenclaws video, entitled “Smarter.” The campaign lasted nearly a month long (ending at 11:59 PM on September 3rd), and during that time, NL didn’t just reach their goal -- they raised 303% of it. The video, of course, took some time to make, but the fans were updated on its progress via videos on Not Literally’s official YouTube channel, and also via their vlog channel, called Nerd it Up. In the meantime, Not Literally put out other videos, including three more music videos as well as two different “advice series” in a manner similar to their also incredibly popular Ask Hogwarts series (Ask Westeros and Ask the Doctor).

Things began to become… erm… problematic? in February of 2014, when Ginny announced her resignation from the company. This announcement was made while the two advice series were still in production, and these series did end up getting completed and posted. However, after the final of these advice series videos was posted on June 26th, 2014, production came to a complete standstill. The fans heard nothing about "Smarter,” except for a performance at LeakyCon 2014 by Dana and Ginny, where they sang the song (much to everyone’s joy), and then a trailer released on the official channel on December 12th, 2014.

That is, until March 15th, 2015, when Erik made a public post on the Not Literally website (which he promoted on the official NL Facebook and Twitter) entitled “Where’s the Ravenclaw video? What’s up with NL?” in which he quote-unquote “explained” the nitty-gritty of why there were no updates. According to him, the video was still unfinished, and since Ginny had resigned and he (apparently) hadn’t heard from Dana, he refused to continue work on it. There was also a little bit of legal mumbo-jumbo essentially saying that Dana could, if she so chose, dissolve NL entirely and that if this were to happen, all of the NL videos would be deleted. Towards the end of this post, he “apologized” on behalf of the entire company and said, “It’s all of Not Literally’s fault, we’re all to blame.” This post got very mixed reception, not to mention created a rift in fans, some of whom supported Erik, some of whom supported Dana, and others who just wanted the dang video, or else a refund for the money they raised.

Two days later, Erik wrote and released another post on the website, “Not Literally Current State of Affairs.” This post started out as more legal talk, but it quickly turned into something less professional -- or rather, something incredibly unprofessional came to light. Included on this post were three YouTube videos which were audio of three phone calls between Dana and Erik dating back to September of 2014. These videos were posted on an account called “Call Logs” which, judging by the fact that these videos were the only three uploaded, was a channel Erik expressly created for the purposes of posting these calls so he wasn’t doing so personally or via either of NL’s channels, and can be found easily via Google without having to go through the Not Literally website. Dana had no idea that she was being recorded, and she certainly did not give Erik permission to record her, much less post them online. There were also screen-shots of their emails dating back to September of 2014, and Dana never gave consent to post these, either.

This nonsense didn’t exactly fly with Dana. Once she realized that the official Not Literally website, Facebook, and Twitter were being used in this way, she wrote her own statement, posted it on her Tumblr, and then promoted it on the NL Facebook and Twitter, the credentials to which she still shared with Erik. When this post went live, many of the fans rallied around her, posting comments praising her for her strength and courage through all of this drama.

As soon as Dana became active online, Erik began to retaliate. He deleted and hid many of the comments and posts to the NL Facebook page that supported Dana and/or criticized him, and blatantly ignored one fan’s request to “detox the internet” by taking down the post with the phone call recordings, despite having favorited an earlier Tweet of hers with the same request.

(Update: Dana decided to be the bigger woman and #DetoxTheInternet to the best of her abilities, by hiding all of the rogue Facebook posts, including her own statement.)

Eventually, Dana refused to say any more on the matter publicly, and once she stepped away, so did the fans. There were no more posts on or to the NL Facebook page, and while the internet was never “detoxed” (i.e., the recordings are still there), no more has happened. It would appear that the drama is over.

Except it’s not, because the Ravenclaw video still isn’t up yet. At the moment, Erik has all of the “Smarter” footage, and he refuses to give it to Dana. He is ignoring her requests to let her have access, even refusing to answer the door when she tried to go to his house with a mutual friend. At this point, Dana’s only choice is to get a court order, which would suck. Really, really suck.

That is, unless Erik gives Dana access to the footage willingly. And that’s where we, the fans, come in.

We as fans are petitioning Erik to give Dana full access to the “Smarter” footage, so that the video can go up and we can end this ridiculousness once and for all.

It is time for this nonsense to end. Let’s save “Smarter.”

UPDATE 6/19/15: For fairness' sake, I decided to link to the "rogue" posts on the NL website back in March, so you can see Erik's perspective. However, understand that this does NOT mean I support any of his actions, especially the recording of phone calls. Please do not click on the recordings on the second post. I don't know what was said, since I didn't click on the links myself, but whatever was said, it is none of our business.