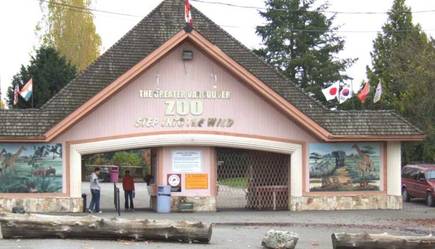 Close the Greater Vancouver Zoo & Save the last remaining Animals

2190 people have signed this petition. Add your name now!

Please sign this petition to close the Greater Vancouver Zoo and save the last remaining animals by sending them to a sanctuary.

Once again the Greater Vancouver Zoo is in the news (2022), concerns have been raised regarding a male and female hippo, Haben & Hazina who have been separated and are living isolated lives barren enclosure that couldn’t be further from their natural habitat.In the wild, hippos typically live in social groups of around 10 to 30 individuals. They spend most of their time wallowing in shallow, slow-moving water as they bask in the warm sun of their natural climate. There is a video of their enclosure online which is quite sad., a dark barren shed with barely enough water to float and no light of day.

There is a new owner at the Vancouver zoo. A greedy businessman from Quebec who has zero experience caring for animals as well has never worked in the captive animals business.

In 2020 the zoo euthanized "Oakleaf" an aging emaciated senior Moose (2020). The female Moose's health had reportedly been declining for months. A patron with her children snapped a picture of Oakleaf and emailed the zoo, who responded "She's old." The BC SPCA is reportedly looking into this.

Last year a report prepared for the Vancouver Humane Society by Zoocheck Inc. cited "lack of space for certain species, lack of appropriate environmental conditions, lack of environmental and behavioural enrichment, lack of shelter and privacy areas, lack of proper social contexts, excess ground water and water logging of enclosure substrates." The Vancouver Humane Society called on the zoo to improve conditions for the animals, after a report found many of the animals were assessed as bored and frustrated.

The Zoo always seems to be 'for sale' and has had a slew of owners, mainly shady businessmen seeking profit instead of caring for the treatment of wild animals.

The Zoo has a long history of preventable animal deaths as follows:

On 2015- 08- 17, "Rakesh", a 15 month old male red panda died of a fungal infection at the two months after being transferred from Winnipeg as part of a program to preserve endangered species. Veterinarians in Manitoba had not diagnosed Rakesh with the illness because he wasn't showing any symptoms and there was no information in his medical cards.

On 2014-04-29: "Hani", a 3 year old Siberian tiger was found dead. The necropsy results were never made public. Hani died after showing symptoms including refusing to eat and lethargy. The median lifespan of a female Siberian tiger in captivity is 14 years. She was 3.

In December 2013, "Sweetie" an 18-year-old Siberian tiger was euthanized who was suffering breathing problems, loss of appetite and ongoing lethargy. The necropsy showed she was suffering from a hernia.

In July 2013, 'Charlie' a 46-year-old white rhino was euthanized. The necropsy determined his teeth had deteriorated and his esophagus was blocked with food.

In November 2012, "Jafari" a 12-year-old giraffe was found dead inside his 'heated' barn. He had no apparent previous health conditions.

In November 2011, "Jafari's" giraffe mate 'Eleah' and son 'Amryn' were found dead inside their barns. Jafari (noted above) died a year later. Giraffes are social animals that live in herds with up to 50 other Giraffes.

There are 2 surviving giraffes, Jenga (female, 4) and Pompey (male, 9). Giraffes do not acclimate to temperatures lower than 50 F/ 10C. Many preventable giraffe deaths worldwide are attributed to cold weather conditions of their zoo they are held captive in.

In 2011, the Zoo was forced to put down an 18-year-old African lion after an inoperable tumor was found in his chest.

In April 2009, it was reported that 4 Zebras were killed after 2 African Buffalo were introduced into their enclosure. The zoo attempted to conceal this from the media. A spokesperson for the Vancouver Humane Society stated the 'Zebras were between 5 and 15 years old, and died from exertional myopathy, a muscle disease causing damage to muscle tissues which is caused by physiological changes (often extreme exertion, struggle, or stress)'. The spokesperson also stated that 'African Buffalo are extremely dangerous' and although the two species co-exist in the wild, they should NOT have been placed together in an enclosed space.

In May 2008, someone broke into the zoo and entered the Spider Monkey enclosure. "Jocko" the male spider monkey, was killed via skull fracture. "Mia" his partner, was stolen and she has never been found. The pair cohabited for 15 years.

In June 2008, "Skye", a female Golden Eagle, was killed by a lioness after landing in the lion enclosure, following a run-in with a group of crows.

In August 2008, during a demonstration a Harris Hawk leapt of his lure and landed on a 4 year old boy's head. According to the zoo's spokesperson, the hawk mistook the boy's head for a perch.

In May 2006, the Crown Counsel of British Columbia laid formal charges against the Greater Vancouver Zoo, in accordance with the Prevention of Cruelty to Animals Act, for failing to provide adequate facilities for a baby hippo acquired in October 2004. "Hazina" the baby hippo that found fame after appearing in a TELUS Christmas advertising campaign, spent 21 months living indoors secluded from the public in a concrete pen and spent her days in an 8 x 8 foot pool. This was the first case of a major Canadian zoo being charged with cruelty to animals. THE ZOO LOST ITS ACCREDITATION FOR 2 YEARS. (Canadian Association of Zoos and Aquariums- CAZA)

In 1997, two reports by Zoocheck Canada and UK veterinarian Samantha Lindley called on the Greater Vancouver Zoo to improve conditions for the animals it holds, such as rhinoceros and big cats. By 2003, few improvements had been made. Recommendations were made to the zoo, including gradually moving away from its current function of a zoo and becoming a sanctuary for native species; however, the zoo refused as they wanted to carry on displaying exotic species.

This petition is not affiliated with BCSPCA or the Humane Society. It is a petition for people who want to voice their opinions regarding the inhumane treatment of animals at the Vancouver "zoo".

Vancouver's lack of sunlight, increasingly cold and damp winters is NOT an appropriate climate for exotic animals accustomed to living in a desert environment. Giraffes, Tigers, Rhinos, Zebras, Camels, Hippos and African buffalo are not native to Canada and should not be forced to suffer through our climateClearly this is evident in the amount of preventable animal neglect cases and deaths.

While the Zoo touts they are doing conservation work but at this rate more animals are dying rather than thriving. They're still primarily about putting animals on display for profit. Animals were not put on earth for our amusement.

We do not need zoos to educate children. Children know more about Dinosaurs then any animals in a zoo.