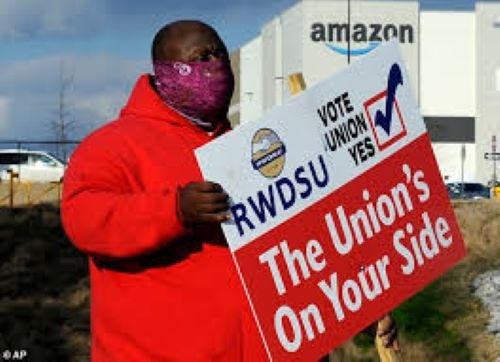 To the management of Amazon:

You shall not exploit a hired worker who is poor and needy, whether he is one of your countrymen or one of the strangers who are in your land and in your towns. (Deuteronomy 24:14). Workers are worthy of their wages. (1 Timothy 5:18).

We are aware that a predominantly African American work force is attempting to form a union at Amazon in Bessemer, Alabama. As progressive people of faith in the Christian Church (Disciples of Christ), we stand firmly in solidarity with our sisters and brothers in Alabama. We strongly oppose any efforts on your part to stop, subvert, or manipulate the process by which the vote for unionization takes place.

Based on our prophetic mandate, we ask you with all urgency to refrain from such anti-union behavior. And based on our efforts to work with others to build the Beloved Community envisioned by Dr. King, we invite you to join with us in promoting greater justice and equity for all workers in Alabama, in the United States, and in the world. Please know that we are praying that you do the right thing, and we are prepared to boycott Amazon if you interfere with the vote on unionization.

Let us move forward together in greater justice and unity!