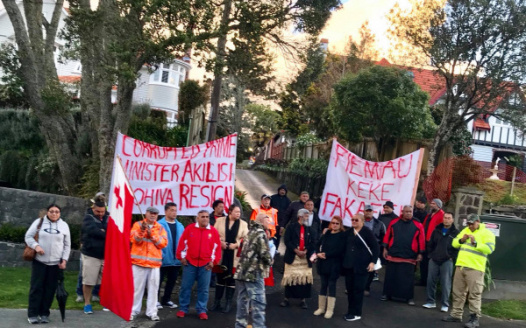 SHOULD NEW ZEALAND TAX PAYERS FUND A CORRUPT GOVERNMENT LIKE THE KINGDOM OF TONGA?

New Zealand Government throwing good money to an already troubled nation fueling the abuse of Power by Tongan Prime Minister Pohiva and his Cabinet while New Zealanders go without. Housing Crisis remains a problem in New Zealand. Homelessness in dire need of fixing sorting out, teachers demanding pay increase remains unresolved. Some of society have to put up with the delay of medical procedures and sacrifice the basic necessities in life while the Government of NZ boost its' assistance to a troubled Tonga already owing in excess of $300million to China. Allegations that the sitting Prime Minister of Tonga, Akilisi Pohiva ordered the Riot that saw the town of Nuku'alofa destroyed by fire dominating Facebook . The Tongan Government borrowed from China to rebuild. Now, the Prime Minister is calling on China to write off the loan. There is no transparency in the Pohiva Government and no holding of Government to account. The people of Tonga have not seen any expenditure filed by the Government for 2015/16, 2016/17 and 2017/18 and now 7 Ministers including the Prime Minister are being audited. Tongan Tax-payers want to know how Confidence and Supply were ever formed. TONGA IS IN A POLITICAL CRISIS AND THE CORRUPT INSIDE THE PARLIAMENT (FALE ALEA) IS UNCONSTITUTIONAL AND UNLAWFUL according to PSA sec Mele Amanaki.

Stand up New Zealanders and vote to end the spending of your tax payers money this way. Charity starts at home. This is irresponsible.

The Ardern led Government don't seem to understand the depth of Tonga's trouble. New Zealanders you have a voice. Every dollar your Government is sending to the Pacific is one less for you. Tonga is a ticking time bomb. The money your Government is giving to this Pacific Kingdom should have been put back to your community to fix and address inequality. Kids in this country need every dollar. Our children are our future. Don't let them go without. Show your support by signing this petition. New Zealand Government have been baby sitting Tonga for far too long and it is at its worst ever. Tonga is collapsing economically and socially as a result of its' political disarray.

By the New Zealand Government funding Tonga is accepting and supporting the Tongan Prime Minister Akilisi Pohiva and his Ministers Corrupt Leadership.

THIS IS NOT OK! THIS MUST END! SUPPORTING ILLEGALITY, ABUSE OF STATE POWER TO RUIN A SOCIETY IS NOT ACCEPTABLE.

THE NEW ZEALAND TAX-PAYERS HAVE A VOICE. HELP THIS PETITION. I WILL TAKE YOUR VOICE TO PARLIAMENT BOTH HERE AND TONGA.

The issues in New Zealand to be fixed is endless but the Government need to know that you don't want your tax payer fund given to lawlessness Politicians in Tonga.