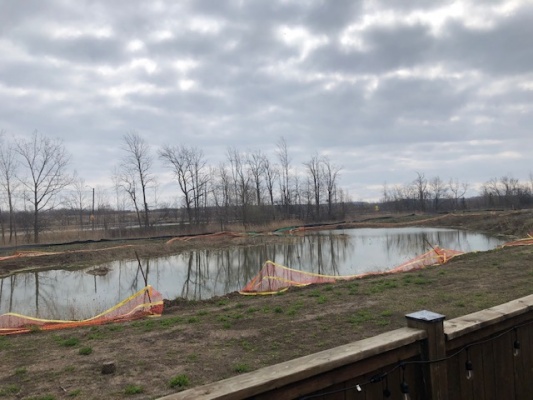 We the concerned citizens of Howland Drive, and Mackenzie King Av, wish to correct a current health and safety issue at the corner of Welland Canal Parkway and Howland Drive. Directly behind Mackenzie King Av. The property is owned by Bayview Wellington(BW) Construction and town houses are proposed for the site since 2015. Three years ago BW razed all of the mature trees on the site and left a huge open mud filled pond of water on the property. The company has tried to drain the water without success. Concerned residents have complained about the danger it posed to children living close by. BW response was to erect a black plastic fence and a orange mesh fence both of which are currently on the ground and offer no protection. We are aware there is an underground stream at this area and that the soil samples have some sort of issue re further construction. Furthermore the Canada geese have adopted the pond as their home and many residents have complained about geese dropping on their lawn and driveway.

Presently there is a large open pond/swamp as seen in the pictures filled with water that is both a health and safety concern. Young children have been seen in the area and the water in the pond is quite deep in certain areas. It is very dangerous in its current unsafe state.

Aesthetically and especially with the unsightly fences the area is a real eyesore and devalues all the well cared for properties in the area.

For three years there has been no communication from either BW or the City of St Catharines to the residents about the current plans for the site. It is evident that the plans are at a standstill.

We implore the City of St Catharines and our city council representaive to advocate for the residents of this area to implement action to:

- To make the area a safe and pleasing place to live which all residents deserve.