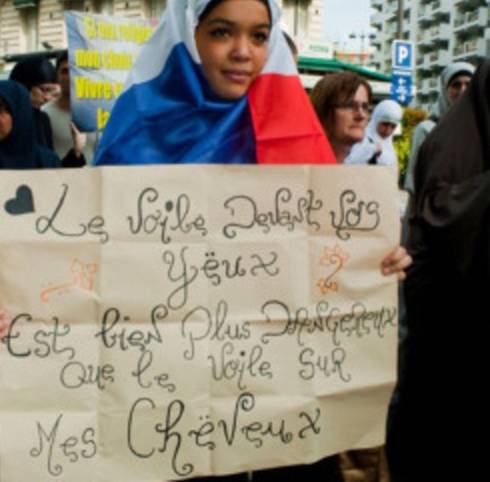 Edit: this petition was ORIGINALLY just meant to be about the headscarf/ hijab, but after being made aware of the fact that EVERY kind of religious symbol is banned in French schools/workplaces (and so not just the hijab) I have decided to make this about EVERY religion.

As many as we can get

Why did you create this petition?

I have decided to create this petition after coming to the sad realisation that almost no one in France much cares about respecting a religious person's right to practice their religion. The banning of religious symbols being a clear proof of this. I want to change that and (hopefully) give people the kind of freedom that they have been denied.

In English it roughly translates to secularism, but the secularism France follows is much more extreme than the one practiced by other countries as can easily be seen by its banning of the hijab and other religious symbols in schools and the workplace.

But France isn't the only country who practices laïcité so extremely? (Belgium for example does too)

Yes that's true. Hence why although I am currently focusing only on France know that by signing this petition your signature is going against every other place who also behaves as such. And I'll at some point edit the title of this petition to be broader/focus on not just France. The reason I am currently only focusing on France though is that I've lived there the longest so I know how laïcité works best there.I am also French, meaning as a citizen of France I feel my voice there will be heard the most.

But France (amongst other places who've also done this) must have a good reason for banning religious symbols?

France has two reasons. The first one being that anyone who displays obvious symbols of their faith (crosses for example) are 'forcing' their beliefs on someone non religious/who doesn't believe in what said symbols are representing. But, if you feel no one has the right to force their beliefs, why then hypocritically force your own beliefs of atheism on anyone who is religious? Shouldn't that be equally seen as wrong? But I'd very much like to clarify practicing your religion/personal beliefs is very very different to ACTUALLY forcing said beliefs on someone. And, as of 2015, I'd have hoped we would have grown to be tolerant enough to allow people to live their own lives, the way they deem it best should be lived (note: tolerance does not mean agreeing, just ALLOWING and in turn RESPECTING a belief. So yes, by believing in France's extreme laïcité, you're being intolerant). The second reason being that anyone who shows signs of being religious will be discriminated against. But, by punishing anyone religious INSTEAD of anyone discriminatory, what France (or any country who practices laïcité so extremely) is saying is that its people are too bigoted to be educated. You are saying is that the very people who's country preaches 'Liberty equality fraternity' cannot learn to treat their human brother/sister respectfully and equally, thus religion must (really) remain banned. But I don't believe that. I believe that the people of France are smart enough to UNTHINK the propaganda they have been fed throughout the years, to stop being so prejudiced towards its people (because yes French people can be religious) and ACTUALLY show French Muslims, French Jews and French Christians 'fraternity' and tolerance. Punish the bigot. Not the victim. Again, a person's religious beliefs are not at fault here- but someone who BELIEVES it's okay to discrimate against someone who holds certain beliefs is.

What will you do with this petition when it has enough signatures?

I'll send it to the president of France and hopefully if enough people have signed it'll get enough exposure to make him change the law. I'll hopefully also go on a March when I'm older and having a tangible proof of support for the very thing I'm marching for would be very helpful I'm sure.

'Liberté egalité fraternité'. As French people it is our duty to honour these beliefs that millions have perished to themselves preserve/honour. By telling a French Muslim woman who wears the hijab (for example, as its one if not the most prominent religious symbol there is) that she cannot go to school while practicing her religion/wearing a hijab you are not only making her CHOOSE between her RIGHT to an education, but also her RIGHT to practice her religion. You are going against our core beliefs as French people- 'Liberté'. Because are you really free if you have to renounce a right in the name of another? Also, by saying that a Muslim woman/someone religious cannot educate themselves and work while practicing their religion what you are really saying is that one cannot ACTUALLY be part of French society while looking Muslim/religious. You're saying that someone cannot give back to France (by educating themselves/working) if they are Muslim/religious, and doesn't that sound arrogant, even ungrateful? And by hypocritically acting like that you're going against yet another core French belief- Egalité. Because in a French pro-laïcité person's eyes someone who doesn't wear the hibab can have a job and an education while someone who wears a hijab/a religious symbol cannot. And by disrespecting someone's right to practice their religion, obviously, you're also going against 'fraternité'. Because if you're forcing someone to go against their beliefs to be accepted/assimilated into society, are you really supporting them? are you really showing them a sense of community? of actual integration?

I hope I've made any of you reading this reconsider laïcité, for France and any other country. If you have any more questions feel free to share them with me- my social media accounts are: @kutrcobain or @theramoanes (Instagram) And silver-cats on tumblr. And remember (in MLK's words) 'An individual has not started living until he can rise above the narrow confines of his individualistic concerns to the broader concerns of all humanity.'