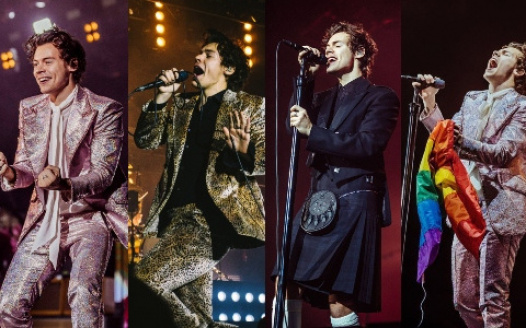 My name is Kim and I'm a 16 year old girl from Malta. Like many people , I'm a massive Harry Styles fan and have been through all of the highs, there are no lows, of his career. Harry Styles is an English singer, songwriter, and actor. He is most known as a member of the boy band One Direction. He made his solo debut in April 2017 when he released his critically acclaimed single Sign of the Times and his self-titled album which was number one in 84 countries. He then made his acting debut in July 2017 in the 8 time Oscar nominated film Dunkirk.

I have experienced many late nights and early wake up calls to listen to his new music or just to watch a 5 minute interview where Harry only manages to get about 3 complete sentences out before the interviewer cuts him off. ANYWAY. I've spent the past 10 months watching livestreams of his shows which take place all over the world; Europe, Australia, Asia, and America. Whilst I was excited to see his charisma and charm win over the hearts of thousands, all whilst wearing a GORGEOUS outfit, I can't help but still feel jealous at the people who get to experience Harry Styles live in their country.

Malta is a small island found in the Mediterranean Sea, close to Sicily, and it is not often that singers come and perform here. There is the annual Isle of MTV that takes place in June where a handful of singers and DJs such Jason Derulo, the Chainsmokers, Martin Garix and Lady Gaga have each performed. But generally, a musical artist having a concert in Malta is unheard of. And I desperately want that to change, specifically for Harry Styles.

I am aware that touring everywhere is impossible. Also, I am pretty sure that Malta doesn't come to mind when planning a world tour for a well known and amazing singer who enjoys to prance around on stage whilst wearing sparkly suits and heeled boots AND has the voice of an angel. But, all I want is that this sunny and picturesque island is taken into consideration if Harry decides to do another tour. I of course will repsect his, and his management's, decision and will continue to show my endless support in every way known to man, and if this fails and Harry doesn't come to Malta, I plan to spend my first paycheck on a plane ticket.

If you as well have fallen for this boy's smile and would like for him to at least consider performing in Malta , all whilst making a lot of people very happy, please sign this petition and hope for the best.