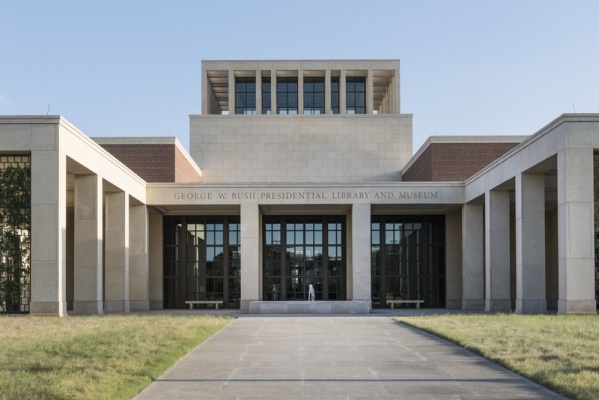 The undersigned representatives of the archives and museum communities wish to convey our deep concerns regarding a provisional agreement between the Archivist of the United States and the George W. Bush Foundation (“Bush Foundation”) that allows for the Foundation’s control and ownership of the existing presidential museum facilities currently run by NARA. We believe this agreement greatly increases the risk that the public at large will be afforded a biased view of history if the Bush Foundation maintains sole control of the content and display of museum exhibits, without supervision by NARA’s federal archivists and museum professionals.

In 2017, then-Archivist David Ferriero stated that presidential libraries are “jewels in [the] National Archives’ crown.” As cultural and educational institutions, presidential libraries make unique and vital contributions to communities across the nation. They have unparalleled research collections which, when combined with a public museum and public programs, provide researchers, students, and the general public a rich opportunity for understanding individual Presidents, the historical context of the times in which they lived and served, and the nature of the American Presidency.

As is the case with most American presidents, the presidency of George W. Bush was a consequential one in our Nation’s history. In the aftermath of the terrorist attacks on September 11, 2001, President Bush declared a global war on terrorism, and ordered the invasions of both Afghanistan and Iraq. In the latter case, the war was justified by the Bush Administration at least in part due to the alleged existence of weapons of mass destruction – stockpiles of which were never found. Additional historical events generating controversy during the Bush years included the handling of Hurricane Katrina, policies on the rights afforded prisoners at Guantanamo and on the use of enhanced interrogation techniques, the dismissal of U.S. Attorneys, and the Bush White House’s actions with respect to the financial meltdown in global markets towards the latter part of 2008. The importance of providing fair, objective, and balanced presentations of these important recent events cannot be emphasized enough.

In recent years, it has been repeatedly noted that the hybrid private-public funding arrangements at presidential libraries and museums have resulted in tensions between private foundations representing the personal interests of former presidents, and archival staff at NARA serving as objective subject matter experts. As noted in a Congressional Research Service (“CRS”) report:

"Some presidential library scholars have raised concerns over whether library exhibits present a balanced version of each President’s Administration or if they tend to portray the President in an inaccurate or, at least, more favorable light. The concerns of these scholars have grown as presidential libraries began to share their materials with K-12 school as educational programming."

We understand that under the status quo ante, private foundations are primarily responsible for the funding of museum exhibits at presidential libraries. Accordingly, we realize that it remains aspirational to expect that NARA staff have the adequate time and resources to ensure perfect adherence to objectivity and balanced viewpoints displayed in the exhibits at each institution. Importantly, however, as the CRS report states, “NARA has final approval of all exhibit content. . . .” The House Oversight and Government Reform Committee heard testimony to this effect in 2011.

Timothy Naftali, former director of the Nixon Presidential Library, details at some length in his recent article in The Atlantic that the museum exhibits at the Bush Library, even under NARA’s supervision, may be said to place a spin on historical events in ways that some might find lack objectivity. However, as Mr. Naftali goes on to explain, there is a natural evolution at presidential libraries and museums run by NARA, where exhibits over time absorb and reflect legitimate criticism of past presidential actions:

"It is important to understand that these libraries are imperfect and each library’s reckoning with a complex past has taken years – usually after the passing of not only the president and first lady but also their key advisers. But over time, they have the capacity to become more objective and less selective."

Indeed, as the respected historian Professor Eric Foner writes in Who Owns History, “history always has been and always will be regularly rewritten,” but “[t]here are commonly accepted professional standards that enable us to distinguish good history from falsehoods. . . .” With these observations in mind, NARA’s continuing supervision of museum exhibits at the Bush Library would best ensure that over the coming decades museum professionals act to ensure that the highest professional standards are indeed met. These include acting consistently with the Code of Ethics promulgated by the International Council of Museums, which states in relevant part: “Museums should ensure that the information they present in displays and exhibitions is well- founded, accurate and gives appropriate consideration to represented groups or beliefs.”

In expressing our concerns, we are of course aware that President Obama decided to build the Obama Presidential Center independently, privatizing the museum without having a traditional NARA archival repository on site, save for providing access to available Obama presidential records electronically (including through ongoing digitization efforts). While that decision certainly raises similar concerns regarding curating matters of historical interpretation, there is an important distinction at play here, namely: the Bush Library will continue to operate jointly with NARA – as was its original purpose – a circumstance giving the imprimatur that the museum on site represents an “official” facility of the government (represented by experts on NARA staff).

Every year approximately 200,000 visitors from around the country and the world visit the Bush Library. For many of these visitors this is their only “up close” experience of a presidency. For the past nine years, everyone visiting the museum has been visiting a facility that has been run by NARA. The agreement fails, however, expressly to make clear that under the new arrangement, the Museum is not part of a NARA facility. The danger for the future is that some percentage of patrons of the Museum will be under a mistaken assumption that the exhibits on display have the “stamp of approval” of NARA, when what is presented may significantly diverge from what NARA subject matter experts, in consultation with historians, archivists, and museum curators, believe to be accurate and true.

In our view, it would be detrimental to the American public if the agreement under discussion becomes a model precedent for the remaining legacy presidential libraries to follow. For all these reasons, we believe that the importance of this transfer of ownership of a presidential museum from NARA into private hands merits further Congressional oversight. We call upon your Committees to direct the Acting Archivist to suspend further activities being carried out under the agreement, until such time as a duly appointed Archivist of the United States has the opportunity to review the change in NARA ownership at the George W. Bush Presidential Library and Museum, and to weigh whether such an historic change is in NARA’s and the public’s best interests. We would expect that this review include consultation with leading members of the historical, archival, and museum communities. Doing so will also enable the next Archivist to address a number of deficiencies and ambiguities in the present agreement, should it go forward, including:

We appreciate the opportunity to provide our views for the Committee’s consideration.