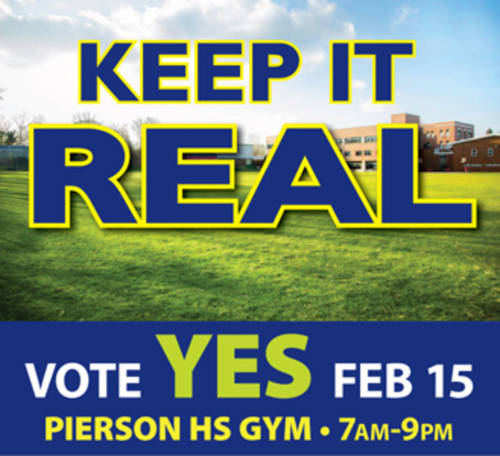 PLEASE NOTE- You DO NOT have to donate to sign this petition!

UPDATE 2/7/16: The time is now to put this issue to rest. Mark your calendars and get to the polls on February 15 at Pierson High School Gym. VOTE YES to redirect existing funds for natural grass and upgraded play areas at Sag Harbor Schools!

UPDATE 9/19/16: http://sagharboronline.com/sag-harbor-school-board... We feel the option that will be brought to the voters (smaller synthetic field and dipping into fund reserves by over $200K) is not a better option than the second option that gives 3 upgraded play areas, and natural grass. Please SAY NO TO SYNTHETIC TURF at the upcoming bond vote! (the photo to the left is the scaled back design.

UPDATE 5/12/16: Total of 761 signature online and on paper! Thank you! HOWEVER, we must keep the pressure on. We learned the the EFPC committee is exploring EPDM synthetic rubber infill.We are awaiting the posting of minutes from the April 21st EFPC meeting so we can see how our concerns were addressed and how the District is planning to proceed.

UPDATE 4/1/16: Happy April Fools Day- though this situation is no joke! Please attend the BOE meeting on April 4th. Continue to show information and evidence about all aspects of Synthetic Turf and how the BEST option is ORGANIC GRASS. This petition will remain open until we are convinced the BOE has opted for an organic grass approach. Scroll to the end to see continued postings of more informative links.

UPDATE 3/14/16: We need everyone to attend the BOE meeting on March 21st. It is important to show up with information and evidence to back up our position. Please continue to pass the word and get more signatures. THANK YOU, ALL, FOR SUPPORTING A HEALTHY ENVIRONMENT. Don't forget to have all tax paying members (grandmas and grandpas too!) of your family sign!

THANK YOU, ALL, FOR SUPPORTING A HEALTHY ENVIRONMENT.

Starting next school year children in grades 6-12 will be exposed to CARCINOGENIC CHEMICALS in the form of synthetic turf if we don’t ACT NOW to stop the installation.

This bond project was narrowly approved (Bond Prop #2: 585-Yes, 507-No, 20-Blank) in the district on November 13, 2013. Since then, more questions have arisen regarding the safety of synthetic turf. National sporting teams and health researchers are questioning its safety. Shouldn’t we do the same?

Our school does not have an organic infill option like we were led to believe 3 years ago, under different leadership. (It molds up in our climate.) The CDC recommends aggressive hand and body washing, immediate change of clothing, and no eating or drinking on these fields. With the entire rear field covered at Pierson this would obviously limit outdoor play and field use for the children.

Other considerations: Synthetic turf fields need to be.....

Please sign this petition to HALT the synthetic turf project (Bond Prop #2) and replace it with a natural, organic, and safe option for our kids.

We are concerned parents who support a healthy environment for our children to grow, play, and be healthy.

Turf Wars: How Safe Are The Fields Where We Play?

What to know what's in synthetic turf? Check out the video on this link: http://grassrootsinfo.org/syntheticturf.php

This consulting firm will meet with town counsels and boards of ed, to dispel some of the "sell job" aspects of the artificial turf companies, who have made an industry out of "selling" to towns and boards of ed. Rarely is anyone ever called into present the "other side": http://metroforensics.blogspot.com/2014/11/how-hazardous-are-green-artificial-turfs.html

From ESPN November 24, 2015: “Griffin's list of athletes with cancer who have played on synthetic turf now stands at200 athletes, 158 of whom are soccer players. Of those soccer players, 101 are goalkeepers. Eighty of the athletes on Griffin's list have some form of lymphoma. Dr. David Brown, a public health toxicologist who spent over a decade working at the Centers for Disease Control and Prevention, told me, "You should never get more lymphomas than leukemias. Leukemias are the most prevalent cancer in that [younger] group, and [Amy's list] has more lymphomas ... her ratios are upside down."

From Herald (Everett, Washington), February 5, 2016: “Amy Griffin, a University of Washington soccer coach, received national attention in 2014 after compiling a list of young people who played on the artificial turf who were later diagnosed with cancer. During a hearing last month in Olympia, she said the list has now grown to 209 such athletes, of which 160 are soccer players and of those 97 are goalies.”
http://www.heraldnet.com/article/20160205/NEWS01/1...